From dusty barn find to daily driver, it seems our cars are never really done. This is the place to share your progress on your project car. We will celebrate your victories and commiserate over your tragedies. But most of all this is a great place to learn!
Post Reply
351 posts

After all this, I'd have to agree... it would probably be worth learning the skills and investing in the equipment just to avoid all the BS and delays.


Mike_B_SVT wrote: Hopefully we'll see it on the road this summer!

I really like the sound of that. It needs to happen! Lately it's been feeling more like a far-away dream, so much time has gone by. But I haven't lost the determination...


70 Cougar wrote:Regarding the trunk lid, can you grind out a little material in the trunk lid hinge where it attaches to body of the car to suck the trunk lid down in that corner? My hood hinge on the passenger side was bottomed out with respect to adjustment and the hood was still a 1/4" to high above the fender and cowl and in order to suck it down a bit we grinded a sliver of material out of the hood hinge. Once the hood hinge is fastened down the bolt head covers up the bit of material grinded out and no one will ever notice.

Hm, it shouldn't be necessary to do that... it would be preferable to massage the body a little to get it back closer to how it was originally. I looked at some old pre-resto pictures and the trunk used to fit great. The restoration shop tentatively finishing up the body may be able to improve it.

Also thanks, I think there is some wax & grease remover laying around, I'll try that on the WS adhesive.
Last edited by Blitz on 04 Dec 2015, 16:43, edited 1 time in total.
-Andrew Chenovick
Photo/Video guy for WEST COAST CLASSIC COUGAR, INC.
Side Gig: FLYING A PHOTOGRAPHY

Seems that this is the regular story when we try and get a low cost paint job. We've heard it so many times over the past 15 years.

Good luck with the new guy
Designed to be driven

That is frustrating, Sorry to hear the time you had. Repainting isn't the end of the world, Just make sure the shop is competent enough to know the arias that are cracked will need to be stripped or at least sanded totally back all the way. Your base has to be good and sound or the new top layer will lift the bottom one.
Top

Man I hate the paint and body issues that you have had. It looks good in most of your pictures but the close up's show the painter wasn't up to the task. I'm sure in the end you'll get everything to your liking just hang in there!

After all this, I'd have to agree... it would probably be worth learning the skills and investing in the equipment just to avoid all the BS and delays.

I think about this too, because it sounds really cool to learn how to do all these things and be able to say "I did it myself"! Then I get scared by what I'll find lurking under the paint (I get shivvers just thinking about it). And then I realize that I'll either have to farm out the body work or learn to fuse metal with fire (which sounds cool, but is probably WAY harder than I think - and I already think it will be hard). And finally, I fear that after spending all the time, effort, and money, that it will end up looking worse than Jose's paint job :-(

Looking for an Eliminator? Then be sure to check out the "Eliminators on the Market" thread in the Classic Cougars For Sale section of the forum!
Top

It's not hard to learn paint and body. I did it at a very young age by watching others do it for a living and asking a lot of questions. I needed work so I went out and bought a good gun, best brand of paint at that time, "it does mater" and found work. The result was great and I did learn from my mistakes, but in the end, I know that if I need to do a job, it's a mater of going out getting the paint, renting a booth and shooting it myself. Just remember that any paint that has an activator/hardener will emit Isocyanates. Make sure you have good ventilation and the best respirator you can find. An air supplied type is best, typical filters will not filter outIsocyanates.
Top

I didn't learn to fuse metal with wire until after my metal had been repaired(farmed the replacing steel part of it out). I would DIY that now myself, too.

I would DIY my own paint again in a heartbeat. Matter of fact, I've been pondering a re-spray of The Heap lately......
T3
Yup, that guy, the hooligan.

How do you know someone is a pilot? Easy! They'll tell you!

Somewhere out there is a tree, tirelessly producing oxygen so you can breathe. I think you owe it an apology.
Top

This is motivational stuff. Mike I think a good way to go about it would be to farm out the major metalwork (rust repair, dent removal, etc) and then once the body is straight, you can do the prep work and paint. That's how I'd approach it as a newbie, anyway.
If I was going to learn to paint cars, I'd probably start on a car I didn't care about as much, though. Not necessarily the "crown jewel" car.
-Andrew Chenovick
Photo/Video guy for WEST COAST CLASSIC COUGAR, INC.
Side Gig: FLYING A PHOTOGRAPHY

Well I might as well update the situation. As I mentioned earlier, the car is now getting the bodywork re-done (argh!) by a real shop. Finn's Auto Restoration in Woodburn, OR. Check 'em out (and if you need any classic car restored / worked on, I can vouch that they do nice work. Tell them I sent you).
So far what's been done is basically just trying to get everything to fit properly. This turned into more labor than I expected, but just about everything needed work, especially the extensions. The fenders and doors and hood and valences and all that needed fiddling too. When I went to check on the car, it was immediately obvious that the body lines were crisper and better aligned. This attention to detail costs some dough, which is not something I have a lot of, but in the end it makes a big difference. 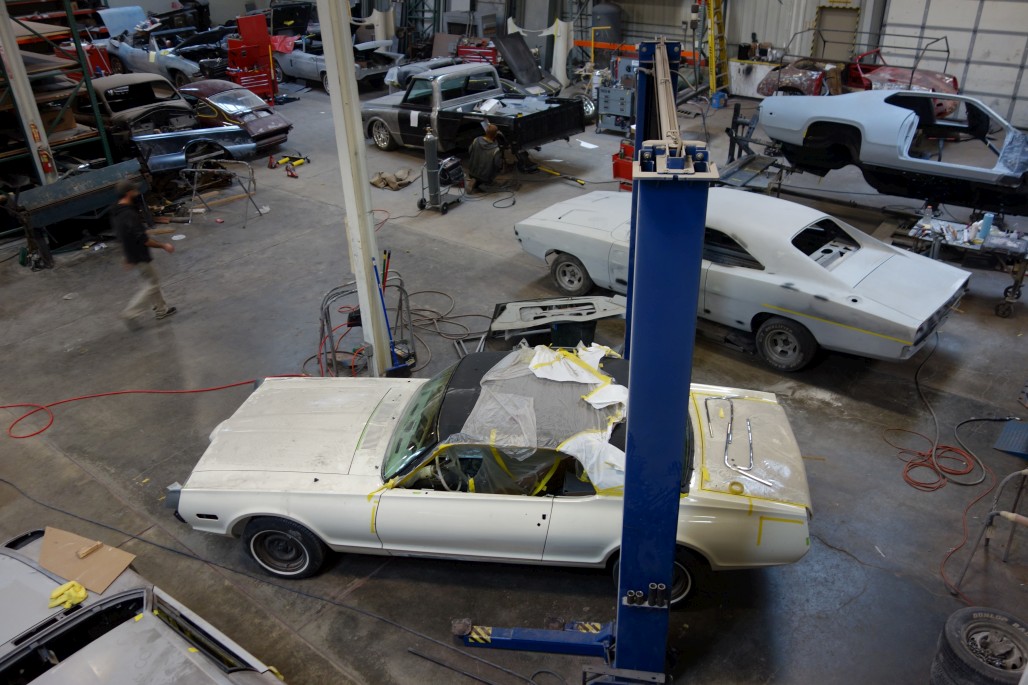 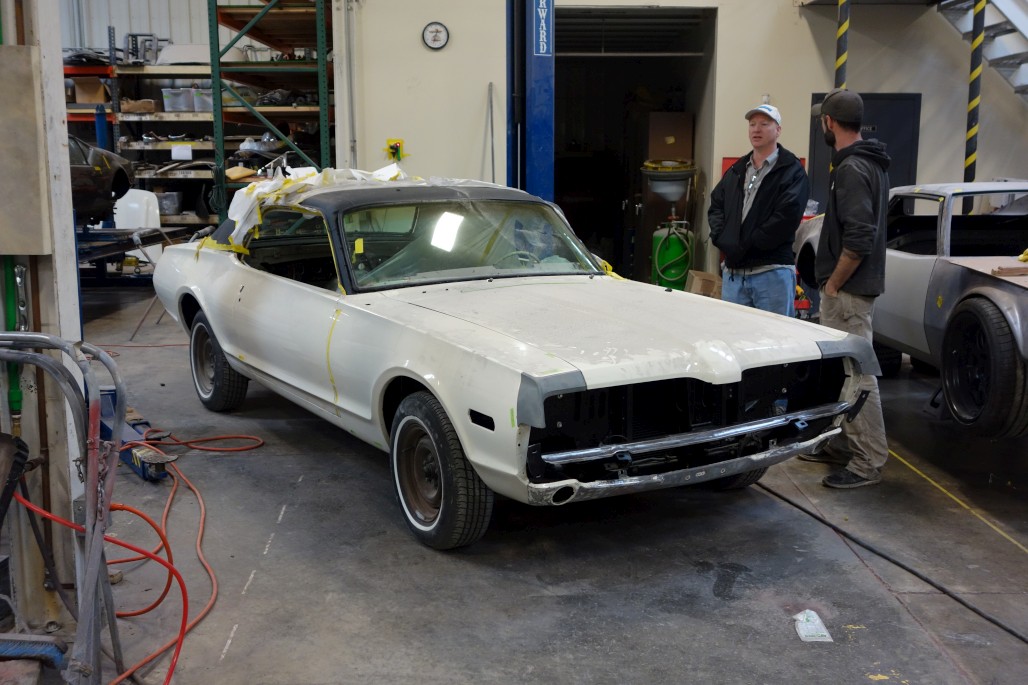 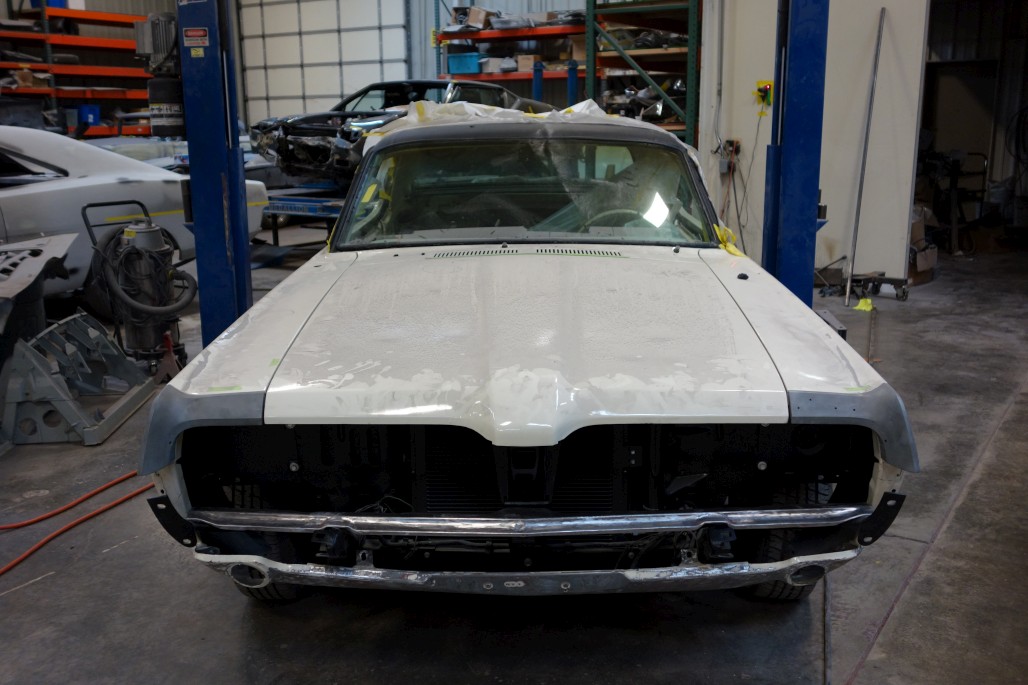 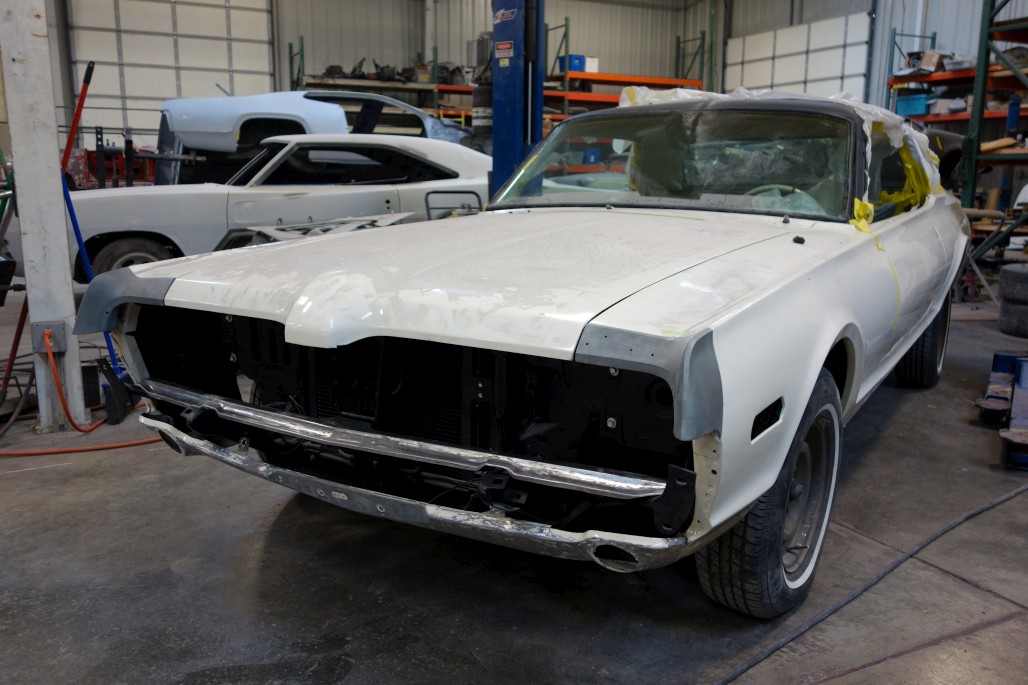 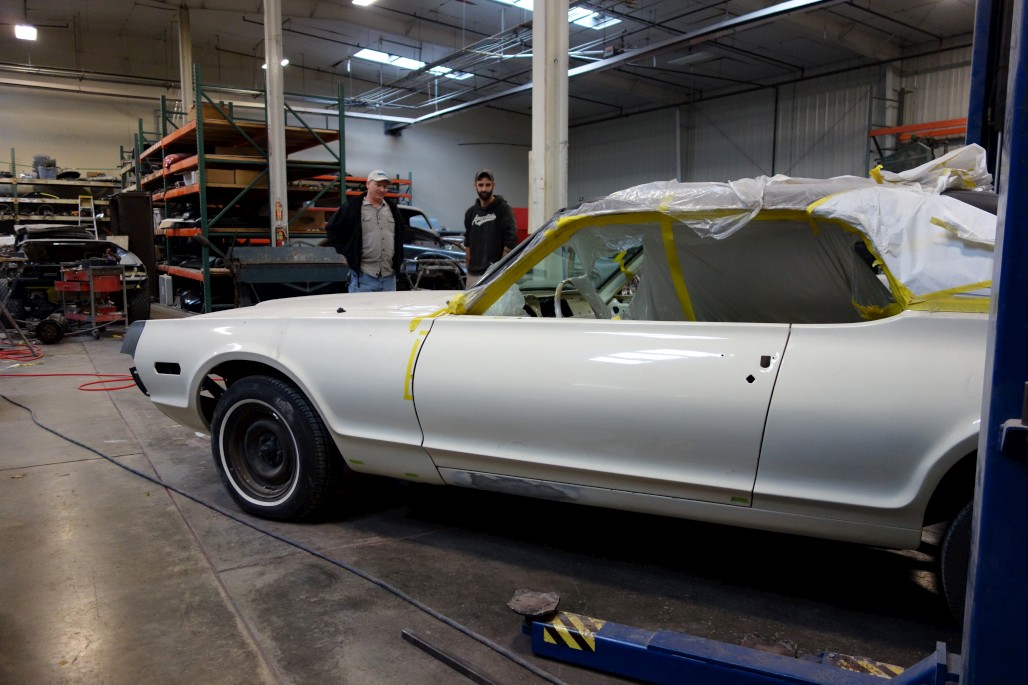 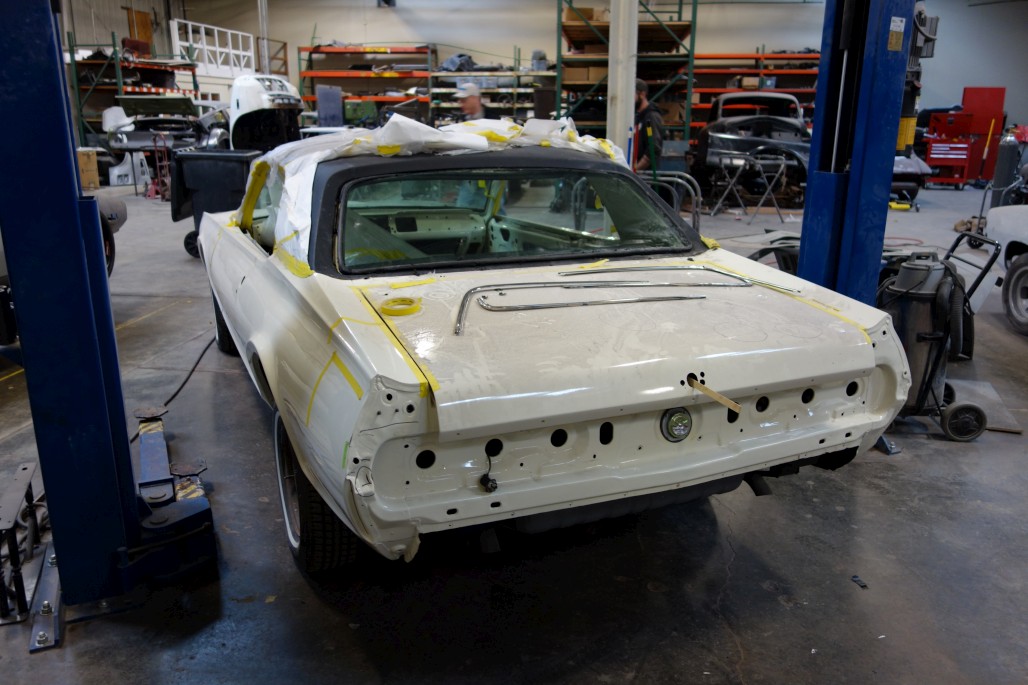 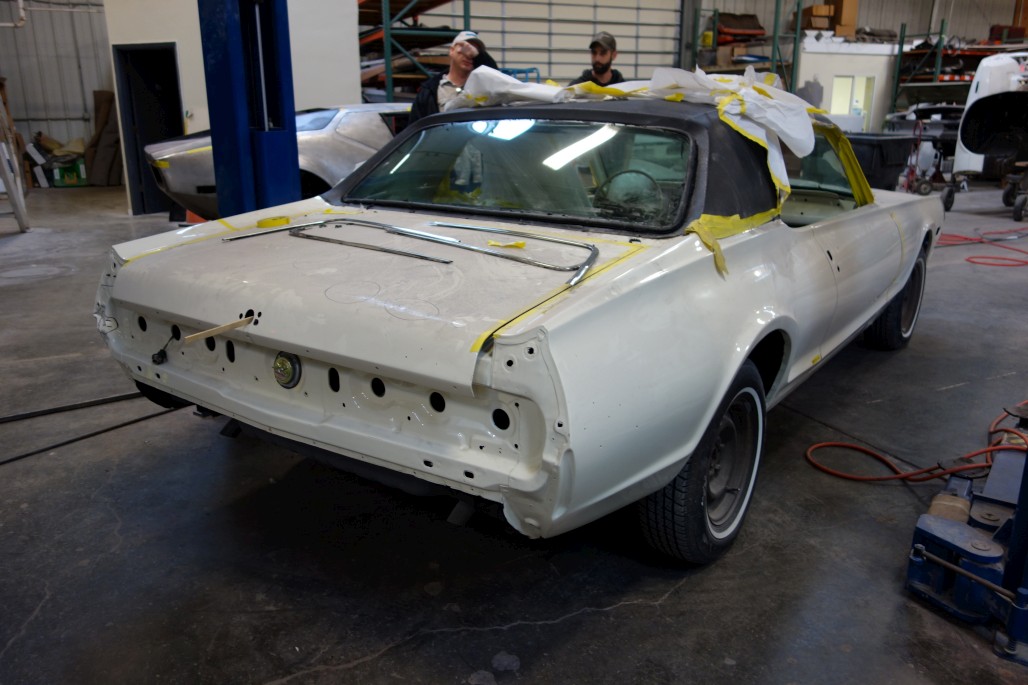 The rear window channel area was a concern, because when it was patched before, back in 2011 with two separate pieces, it wasn't quite done right. Because of this, the panel didn't have the upward "crown" contour to match the trunk lid, and there was a big 'ol gap no matter how I adjusted it. The pic below doesn't really do it justice, but here's a "before" shot. 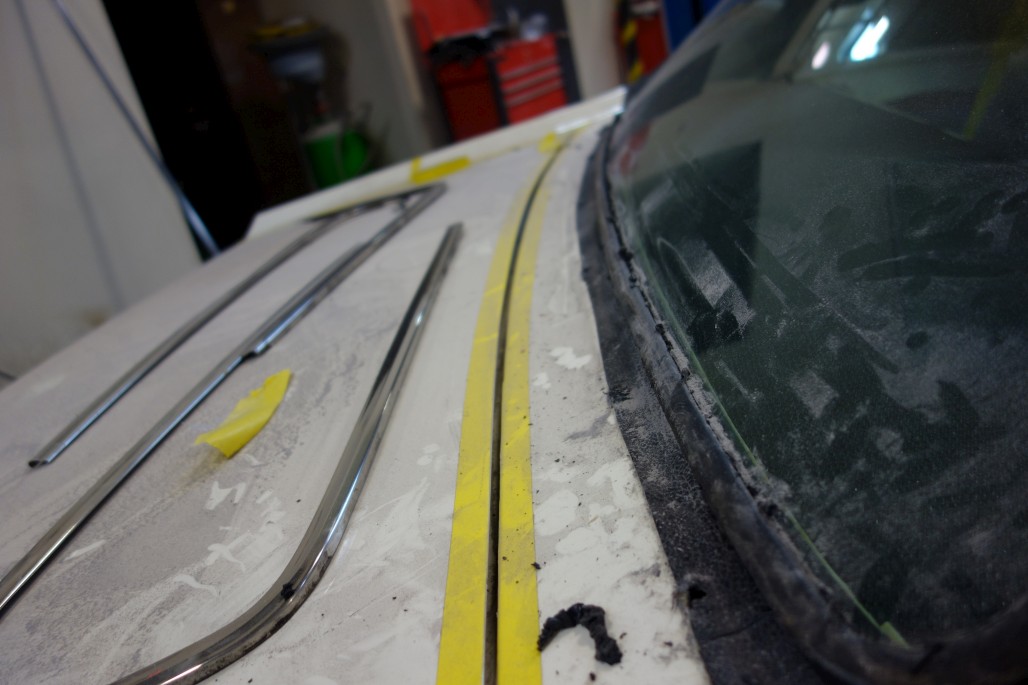 So, I bit the bullet and bought the new Dynacorn patch panel for this area, and the shop removed the old repair and began fitting the new piece. 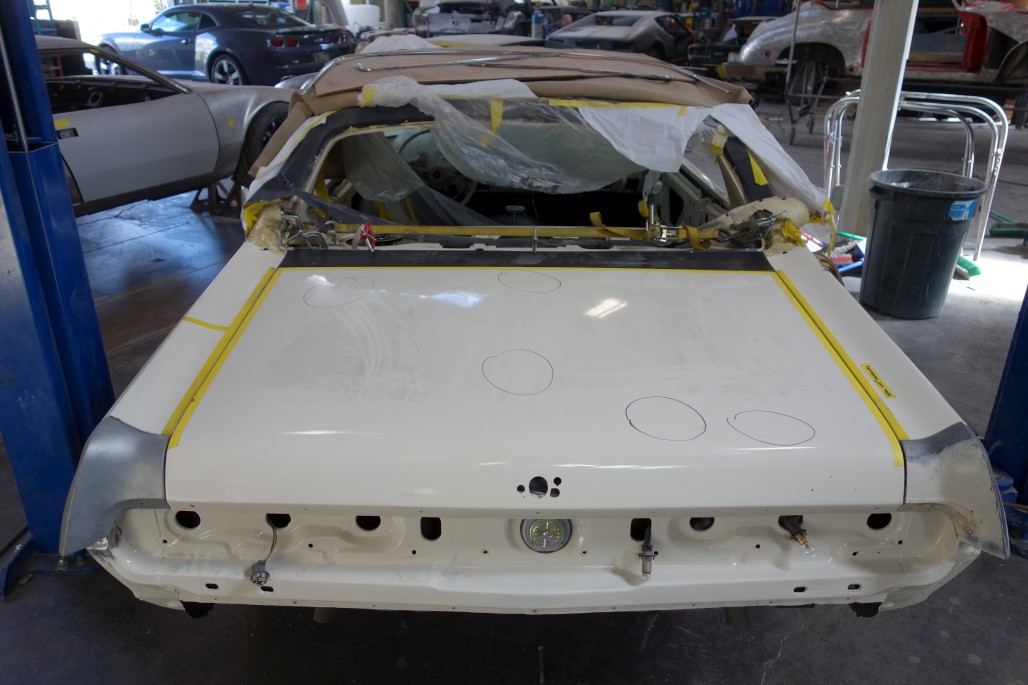 The glass had to be removed, and the vinyl top had to be peeled up a bit. Fingers crossed that the vinyl will glue back down without a hitch. 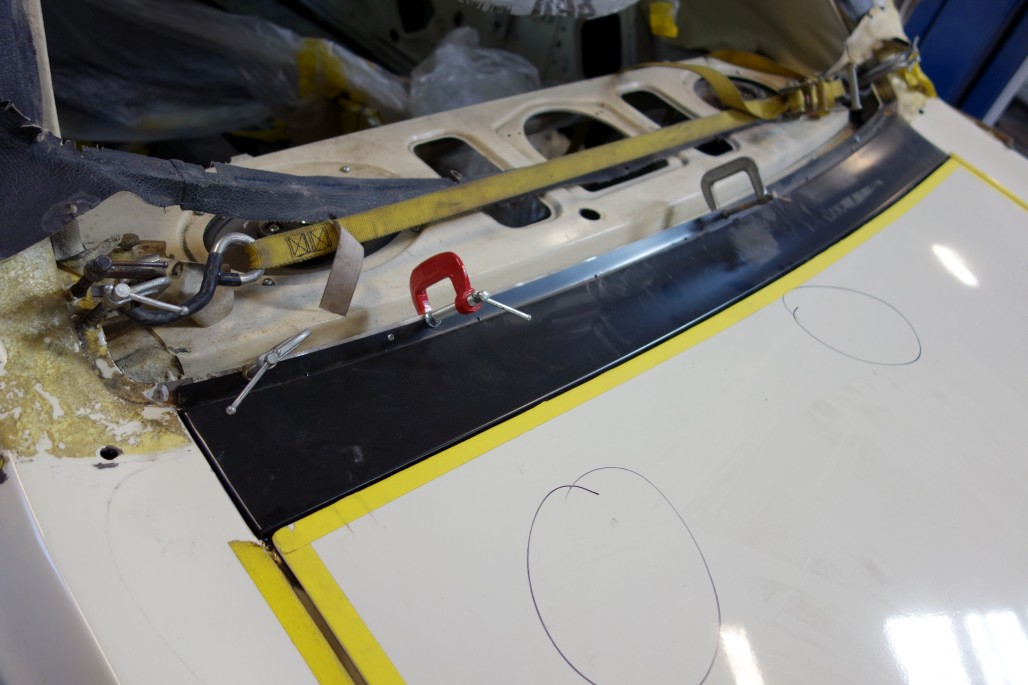 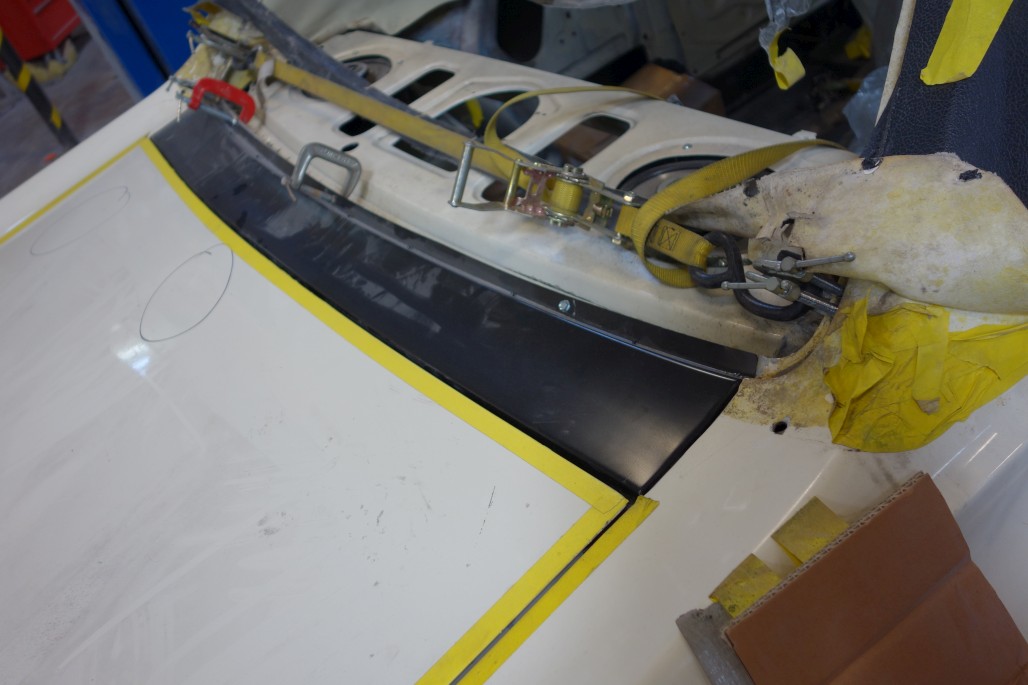 Another area of concern is the RH quarter panel. In front of the rear wheel, the lower body line dives in, rather that staying relatively straight like it should. Some kind of previous bodywork here I suppose. The pic below illustrates what's going on, red line added for reference. 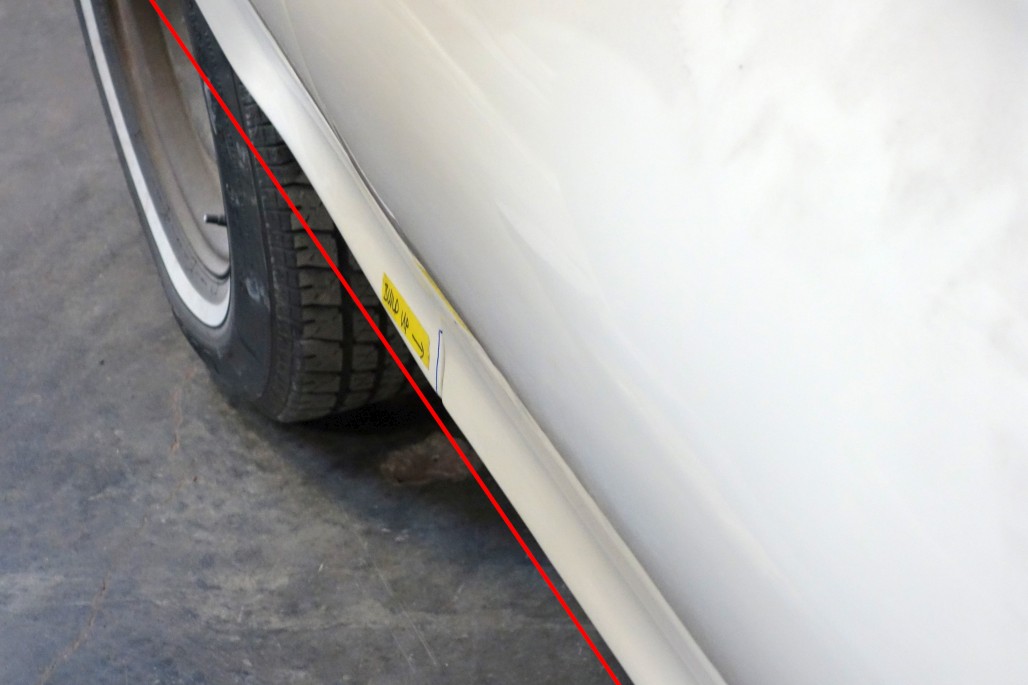 I haven't decided yet whether to address this or not. They'd probably have to separate part of the quarter skin, tweak it out and re-weld it. Might also require some work to the wheel house. I guess it depends on how much time it will take. They are pretty skilled metal workers.

So that's where things are at right now. There was a pause in activity while I caught up to what $ I owed them, but we're square as of now, and I've started doing some work for them for their new website, so that will help get the ball rolling again. I'm lucky that the timing worked out, and I have some skills to trade for their work. Still, the big expense of paint is looming ahead. I'd love to have the car together and on the road for the WCCC open house in August, but that's looking less likely all the time. We'll see!
-Andrew Chenovick
Photo/Video guy for WEST COAST CLASSIC COUGAR, INC.
Side Gig: FLYING A PHOTOGRAPHY

Andrew, that will look great when it is finished. You will be glad you did it!
Top
Post Reply
351 posts