I'm trying something with my dash pad to simulate what my '08 Bullitt has. I've already figured out it's pretty tricky to get the vinyl to lay right, and you have to be extremely careful with a heat gun or you'll screw up the pattern. I'm still not happy with the final product, but here's a shot of generally what it will look like: 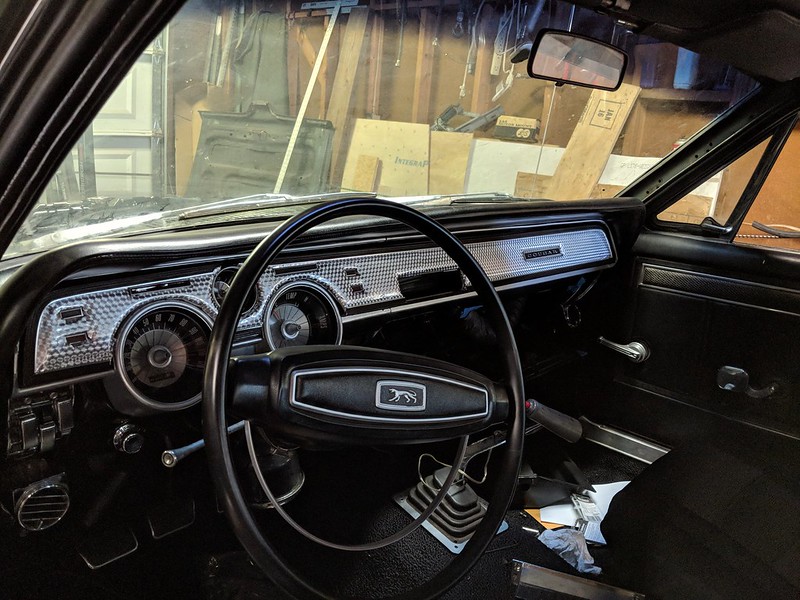 Here's a little closer up: 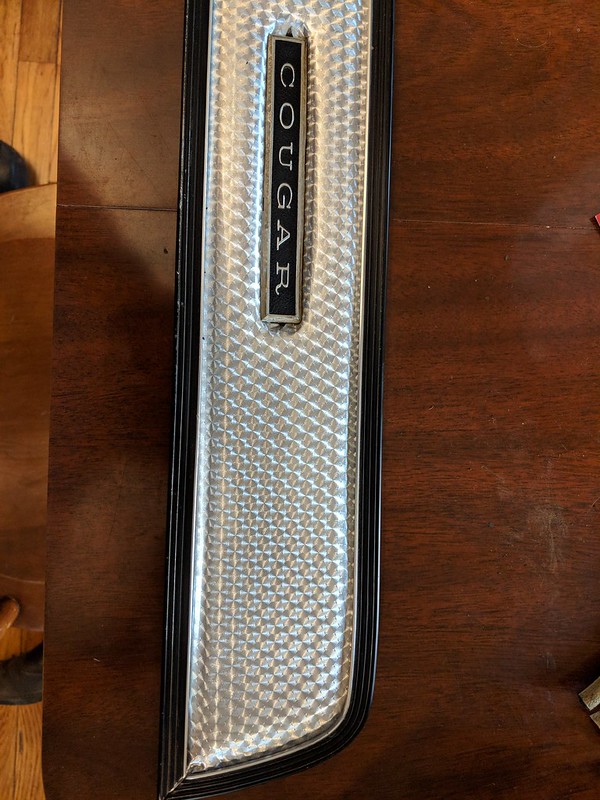 If I can get the corners and indentations to come out alright I'll go with it. If I can't get it to look right then I'll just paint the pad black and it'll look stock. You can see on the lower one that I cut a little too far and the cuts are showing out the side of the Cougar emblem (which will be redone, too). I've got enough material to try quite a few more times, but I may run out of patience at some point.
68 Cougar -Augusta Green
08 Mustang Bullitt - Dark Highland Green
Top

I've been having issues trying to get the right upper radiator hose and finally got it sorted out. It looks like Dayco makes the right part and Gates screwed up their cross reference (the MasterPro is a rebranded Gates - I've got the exact hose with Gates branding on it also). I don't know if Gates even makes the right one under a different part number. Here's the difference: 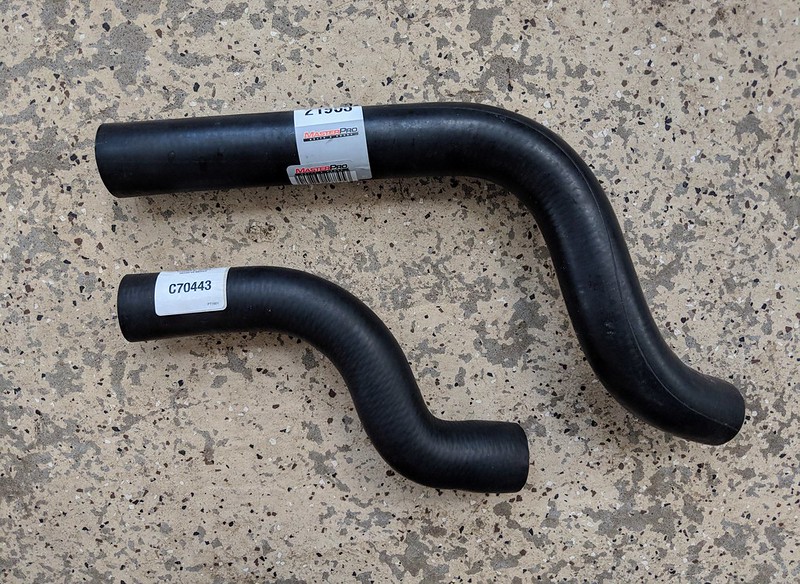 I'm thinking the Gates (longer) one is maybe supposed to be for the 24" radiator and they just never did one for the 20". If there's a correct Gates number I'd be interested to know what it is.

Here's a picture of the Dayco installed (minus the clamps) to show what it supposed to look like: 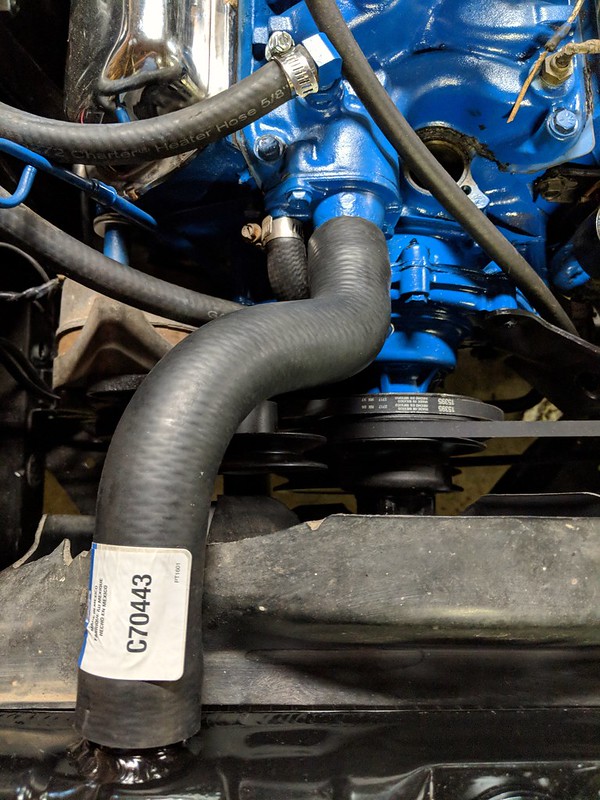 I'm really surprised this hasn't been straightened out. I figured with all of the '67's Cougars and Mustangs running around with this setup it would have been fixed already.
68 Cougar -Augusta Green
08 Mustang Bullitt - Dark Highland Green
Top

Here's my accomplishment for today: 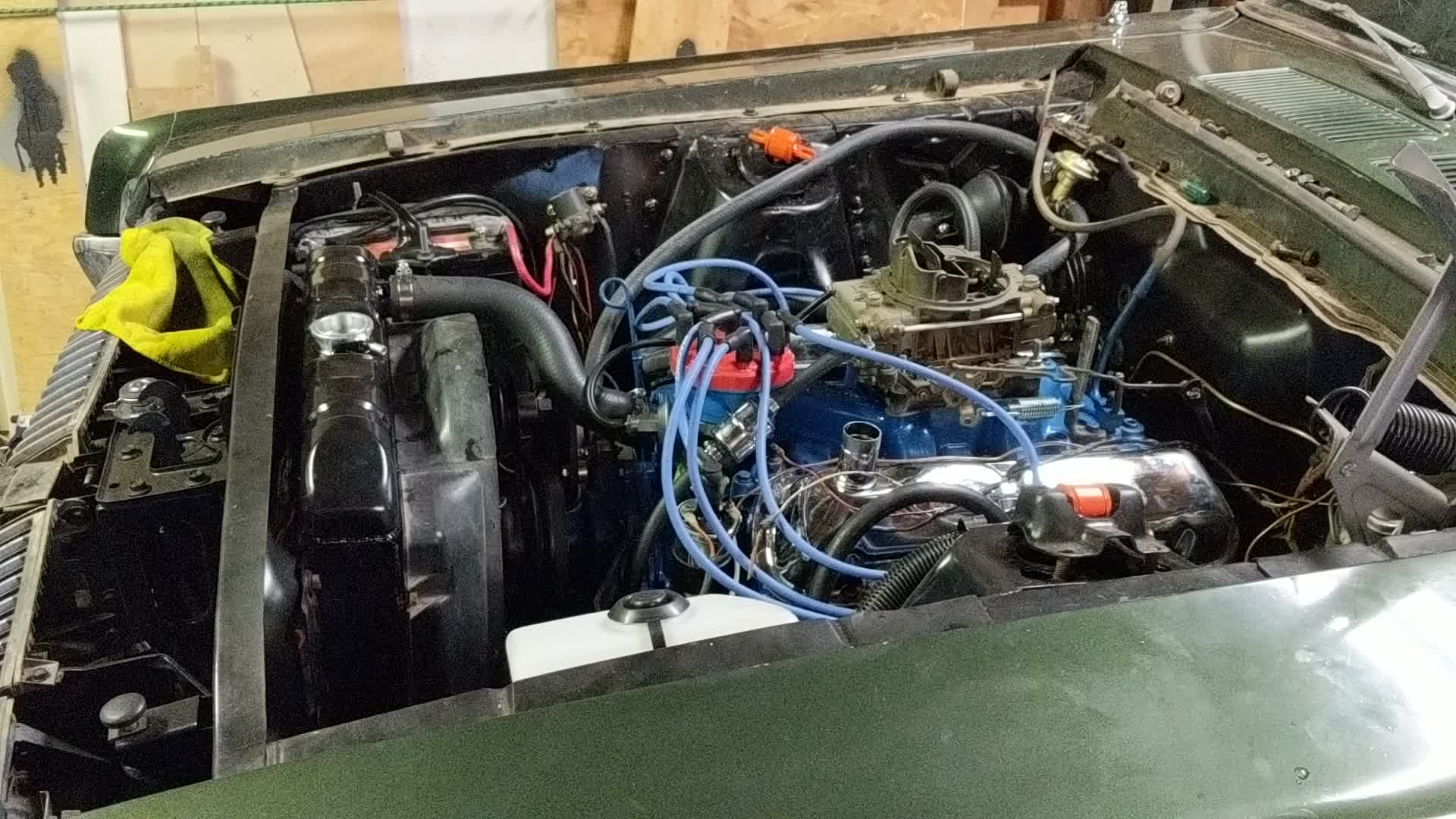 There's supposed to be a video, but I'm having some issues getting it linked (you should be able to click on the youtube address). The picture is a still from the video. If you look close you can see the carburetor is leaking and definitely needs a rebuild. That's next on the list. This video was actually the second time I fired it. The first time only took a few seconds longer. I primed the fuel system by putting a MityVac pump at the carburetor and sucked fuel with it until it came out. Once the carburetor is rebuilt I'll need to reset the timing, too. Sort of amazing I got close enough first try to get it to run. I still don't have the power steering system hooked up. I didn't feel like trying to mess with it at the same time I was trying to get the engine fired. Once it's running a little better I'll work on getting it hooked back up.
68 Cougar -Augusta Green
08 Mustang Bullitt - Dark Highland Green
Top

I got my safety catch installed on the motor mounts.  I probably could have used a slightly shorter bolt.  Hopefully I won't put them to use. 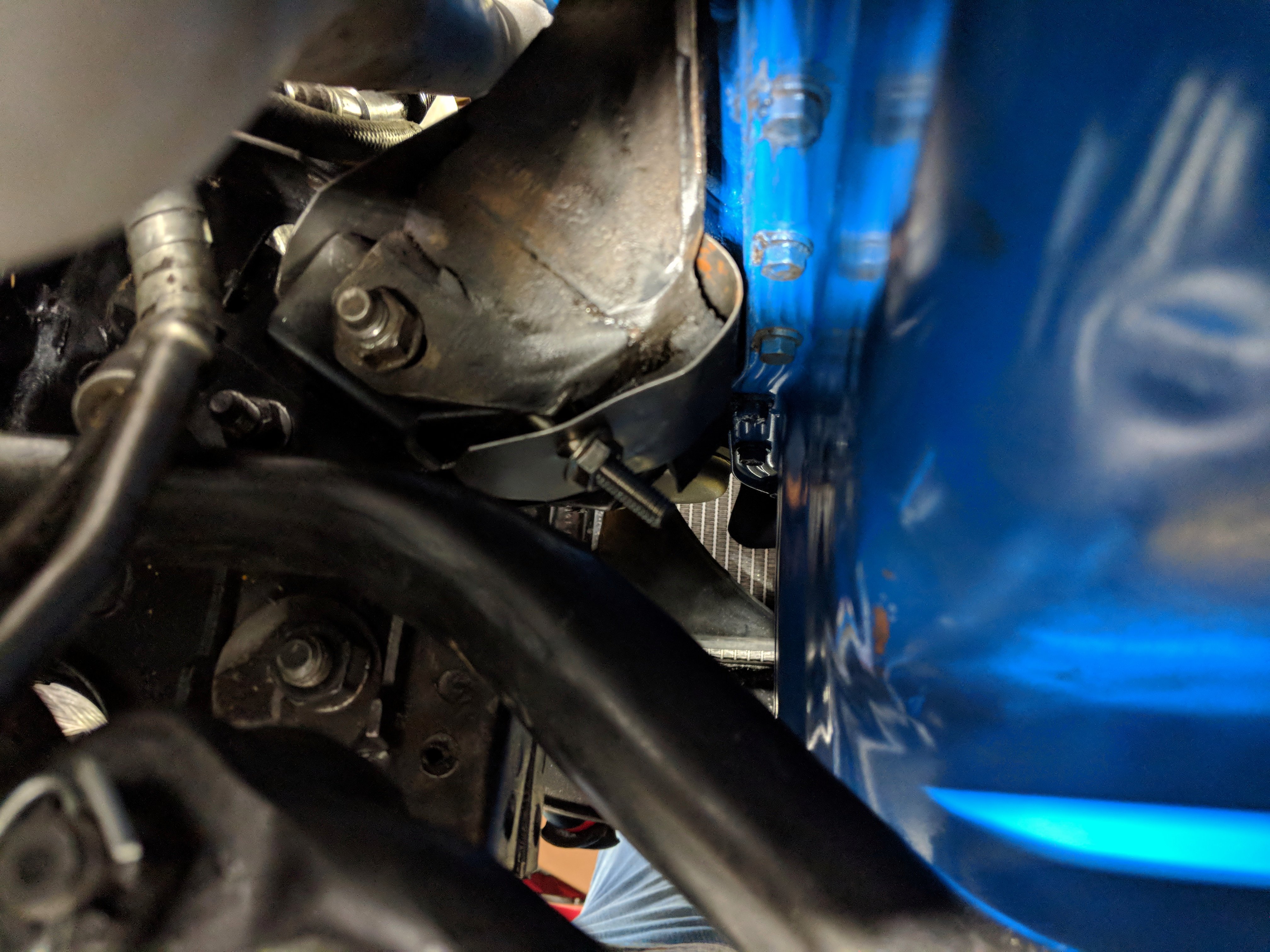 A friend of mine had an extra door handle, so I replaced the '68 flip-up type with a now-painted version of the '67 that matches the door panels better: 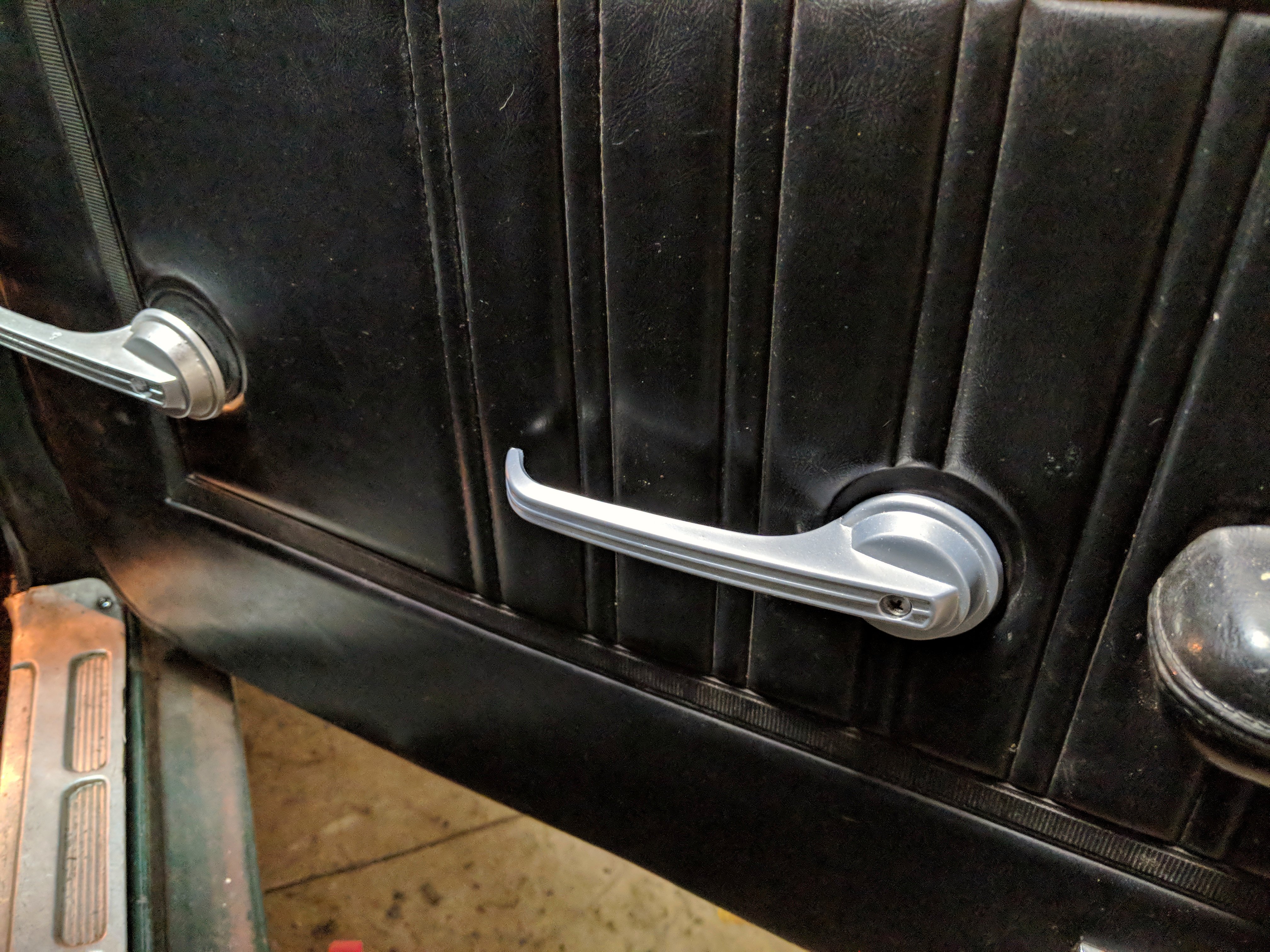 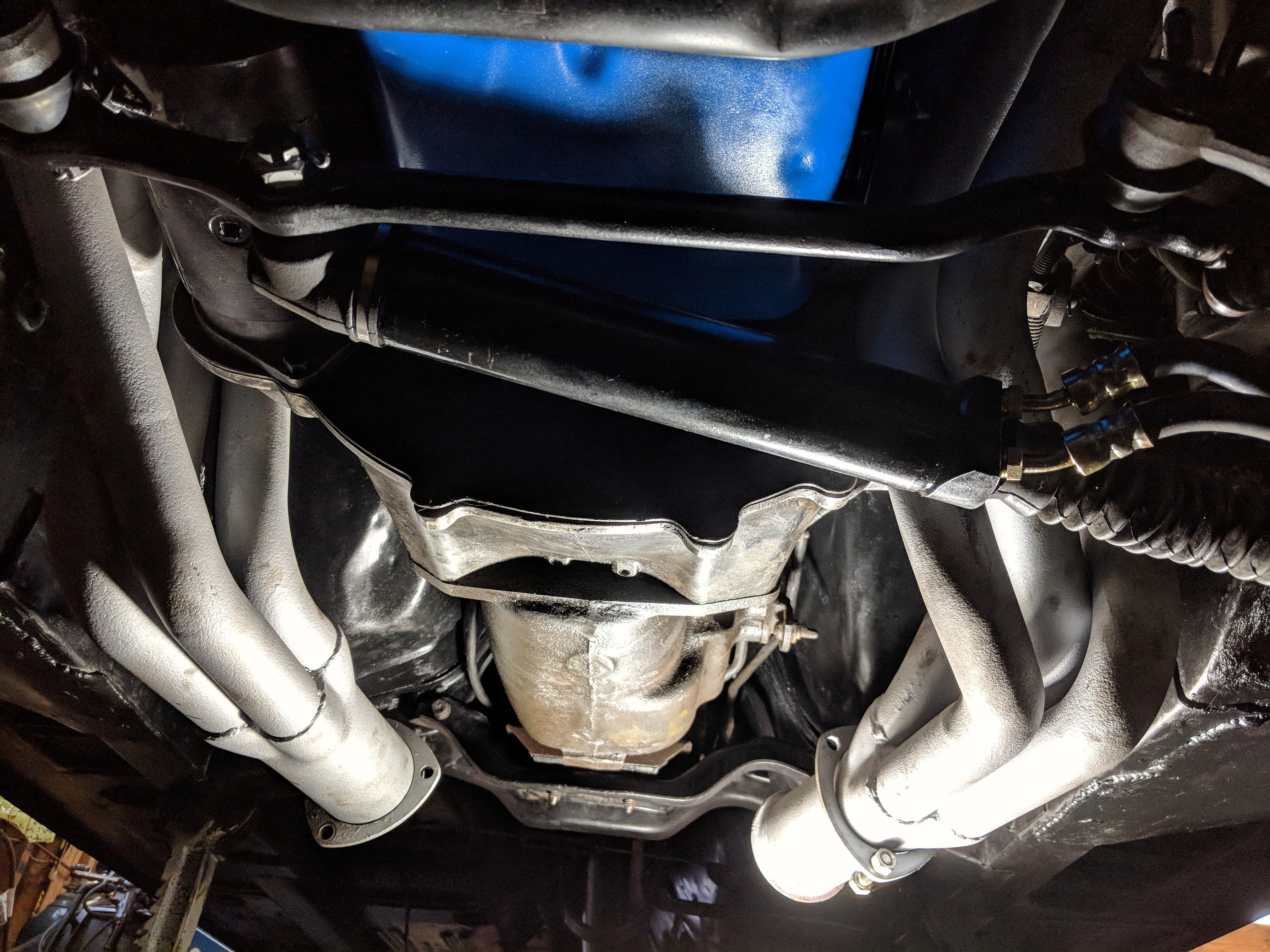 I decided to throw the glasspacks back on and will probably redo the whole system a little later.  I started it up and it wouldn't you know, it sounds just like it did 15 years ago. 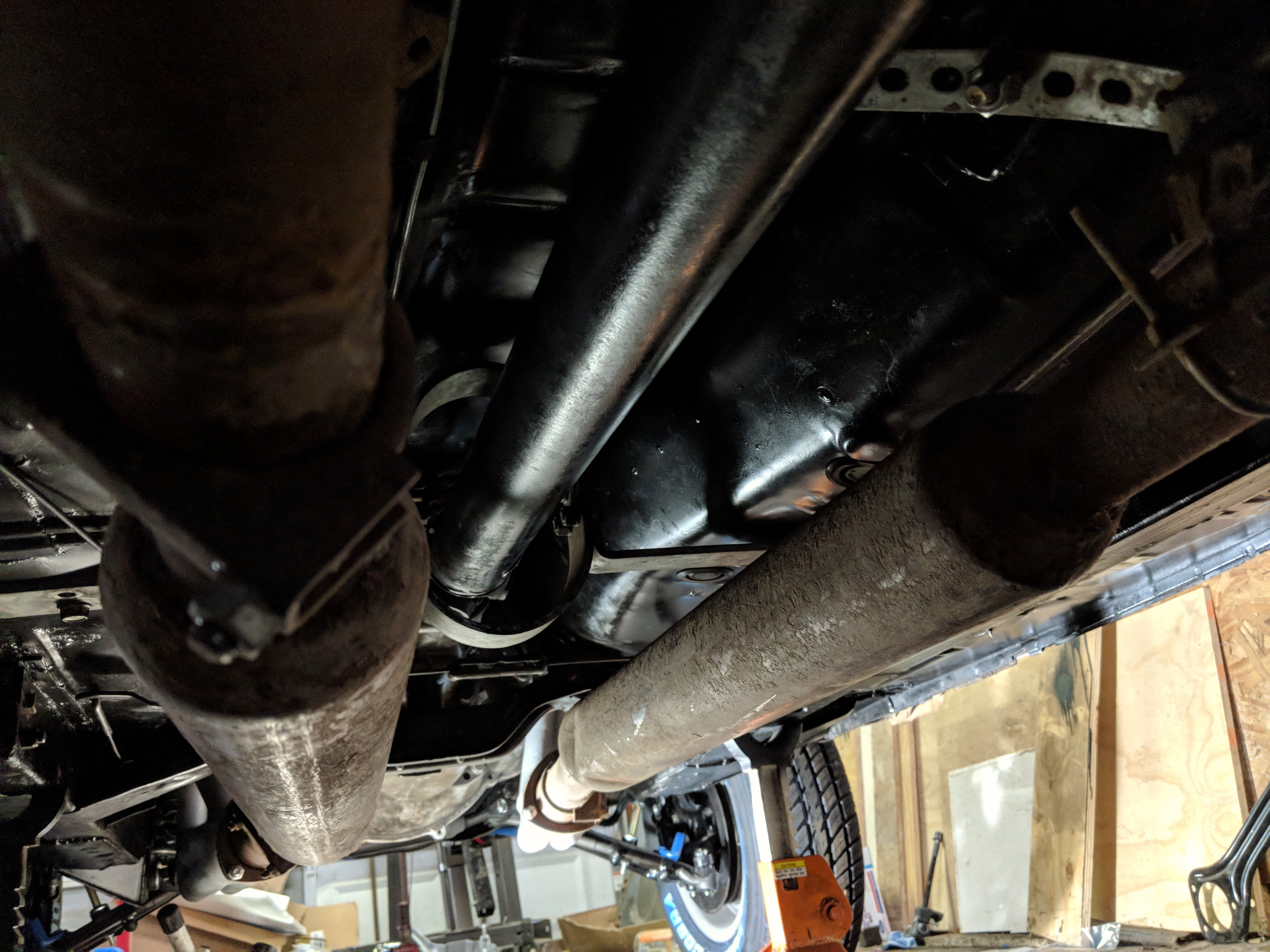 Still a ways from roadworthy, but it moved under its own power today. 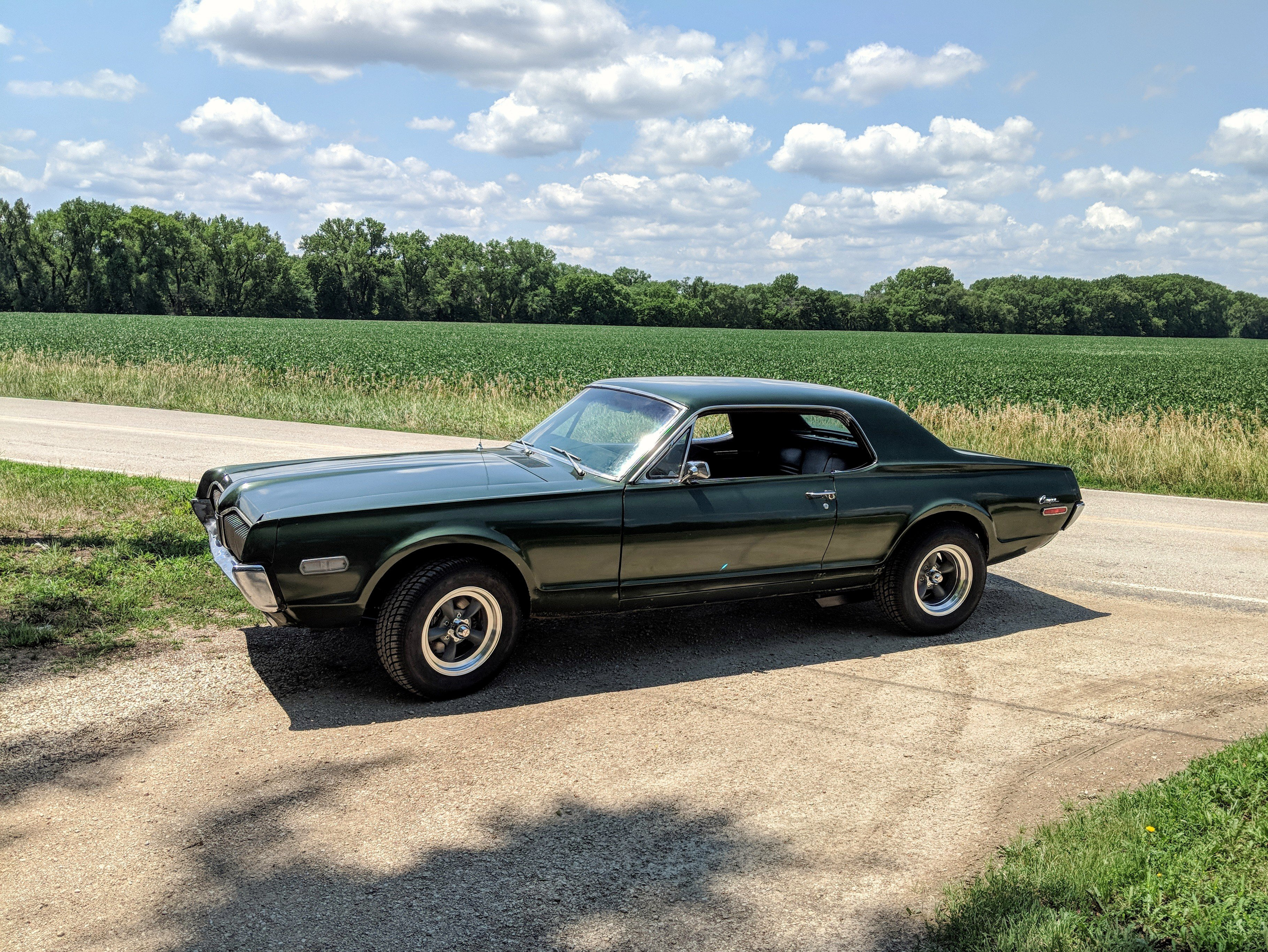 Here it is with the Bullitt: 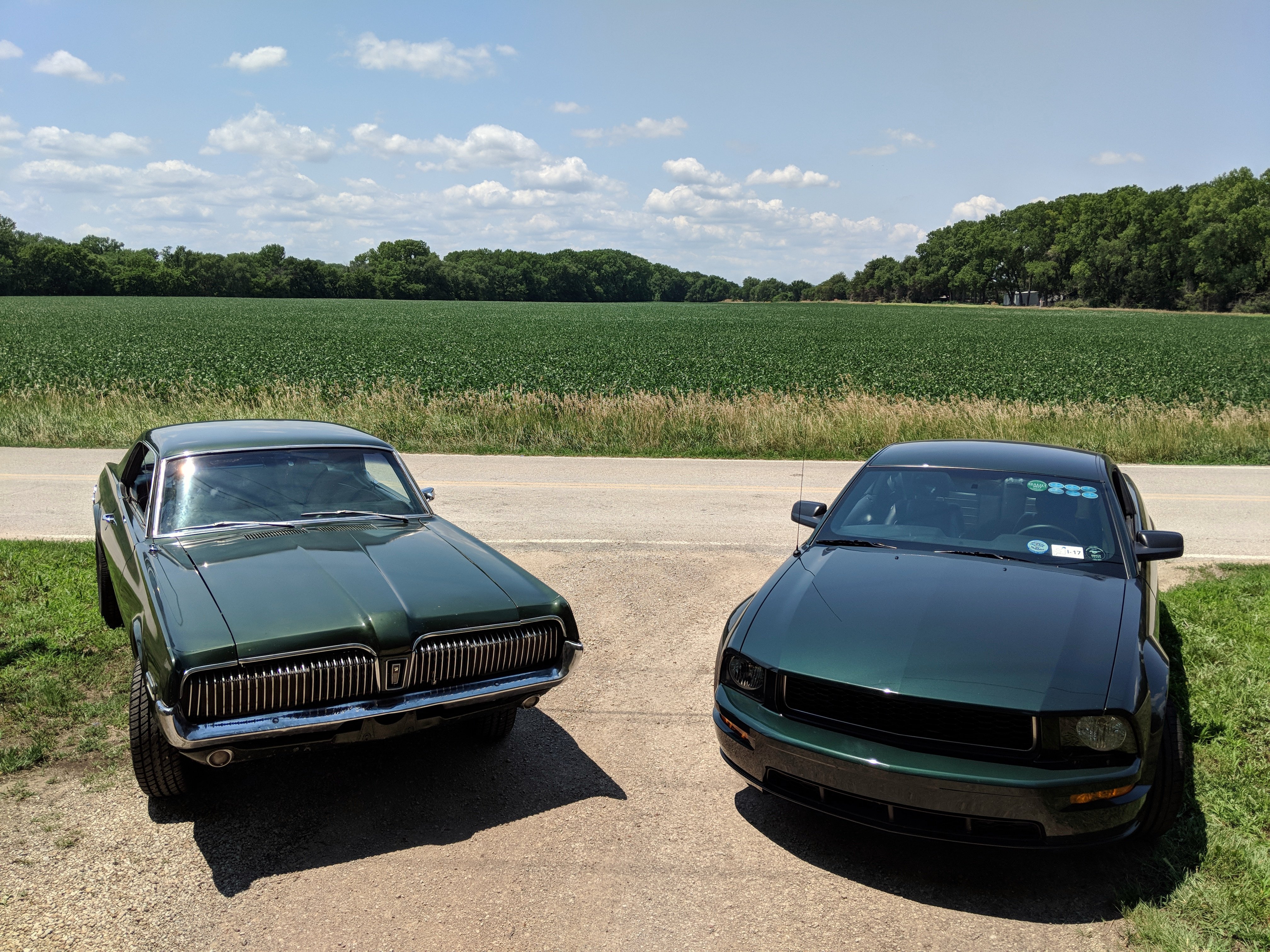 There is still work to do like adjusting the steering linkage, align it, adjust the clutch, change the rockers and finish the interior.  After 15 years of sitting, it's nice to at least be able to fire it up and move it.
68 Cougar -Augusta Green
08 Mustang Bullitt - Dark Highland Green
Top

I spent last night trying to get rid of the valvetrain noise that sounded like an issue with a rocker on the driver's side.  I wasn't sure which one it was and couldn't see anything obvious, so I decided to get a whole new set of rockers for it.  There was very little difference in cost between stock replacements and a set of Comp Cams Magnum rockers, so I spent a few extra bucks on those.  They had the 1.7:1 ratio rockers on clearance, so that's what I got.  Here's what it looked like on the passenger side with the new parts installed: 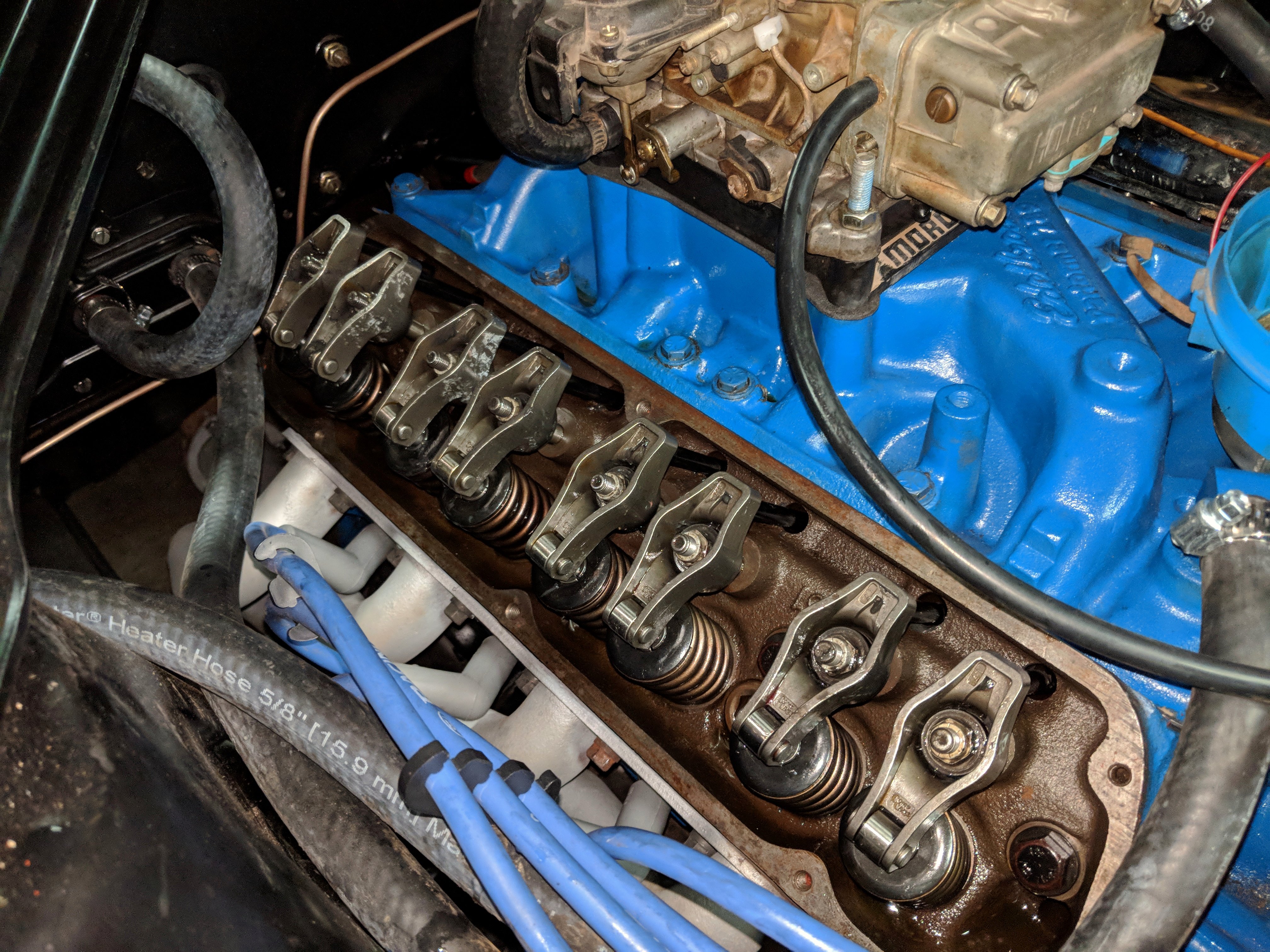 I put everything back together and there was a new valvetrain noise, so I shut it off right away and took the valve covers back off.  Here's what the driver's side looked like: 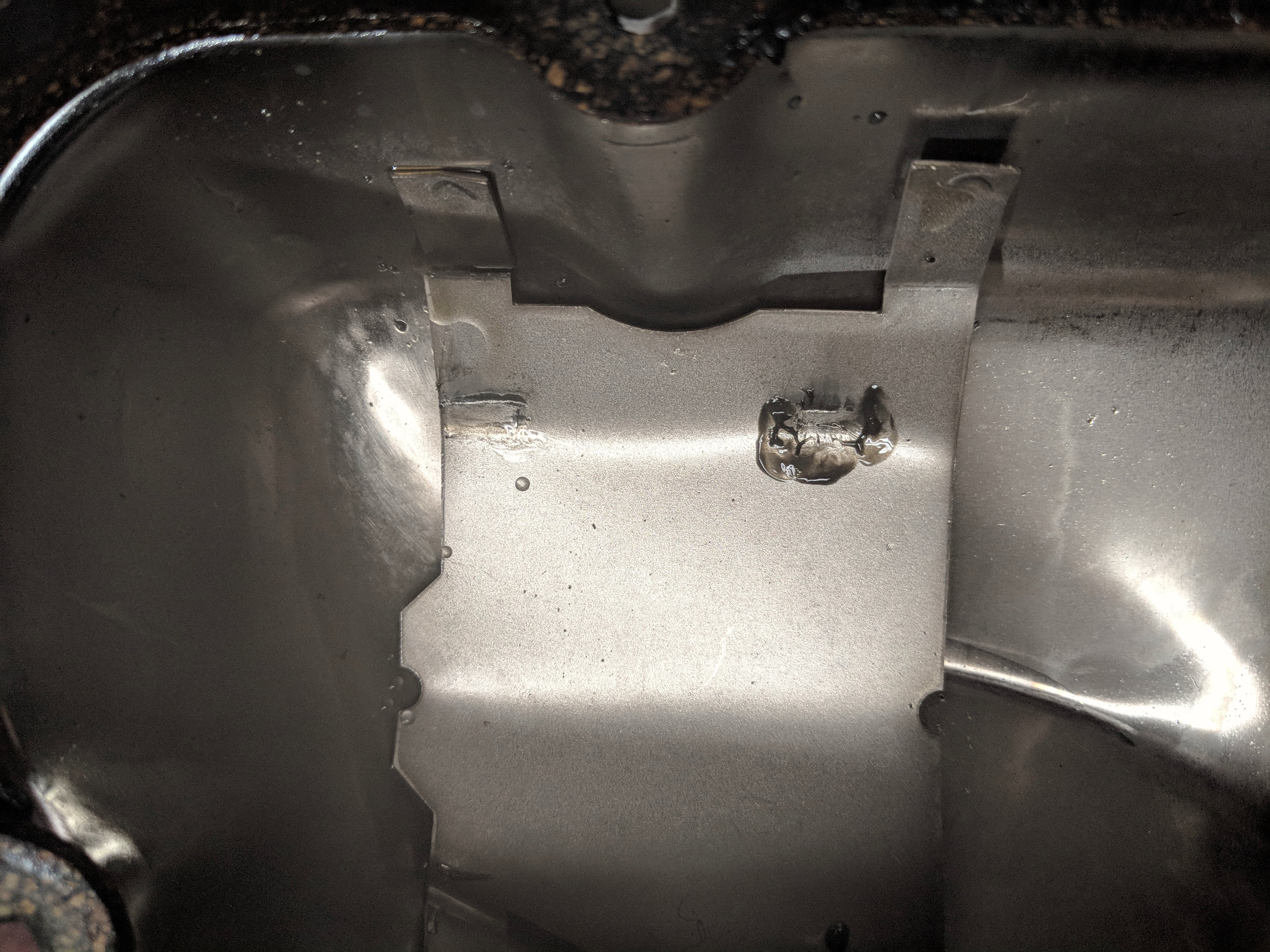 I hear this is almost inevitable if you use anything other than high-clearance valve covers with aftermarket rockers.  I clearanced (cut out) the offending area and put them back on.  The passenger side needed just a few little taps and it won't be a problem, either.  Now that everything's back on, the lifter noises - both original and latest - are now gone.  One other thing I noticed is that the engine seems to be idling better.  I'm not exactly sure what caused that, but it'll sit at 750rpm and idle quite nicely even when it's not warmed up (although it's about 100 degrees out today).  Next step is to finish up the steering adjustments and get the clutch adjusted better.
68 Cougar -Augusta Green
08 Mustang Bullitt - Dark Highland Green
Top 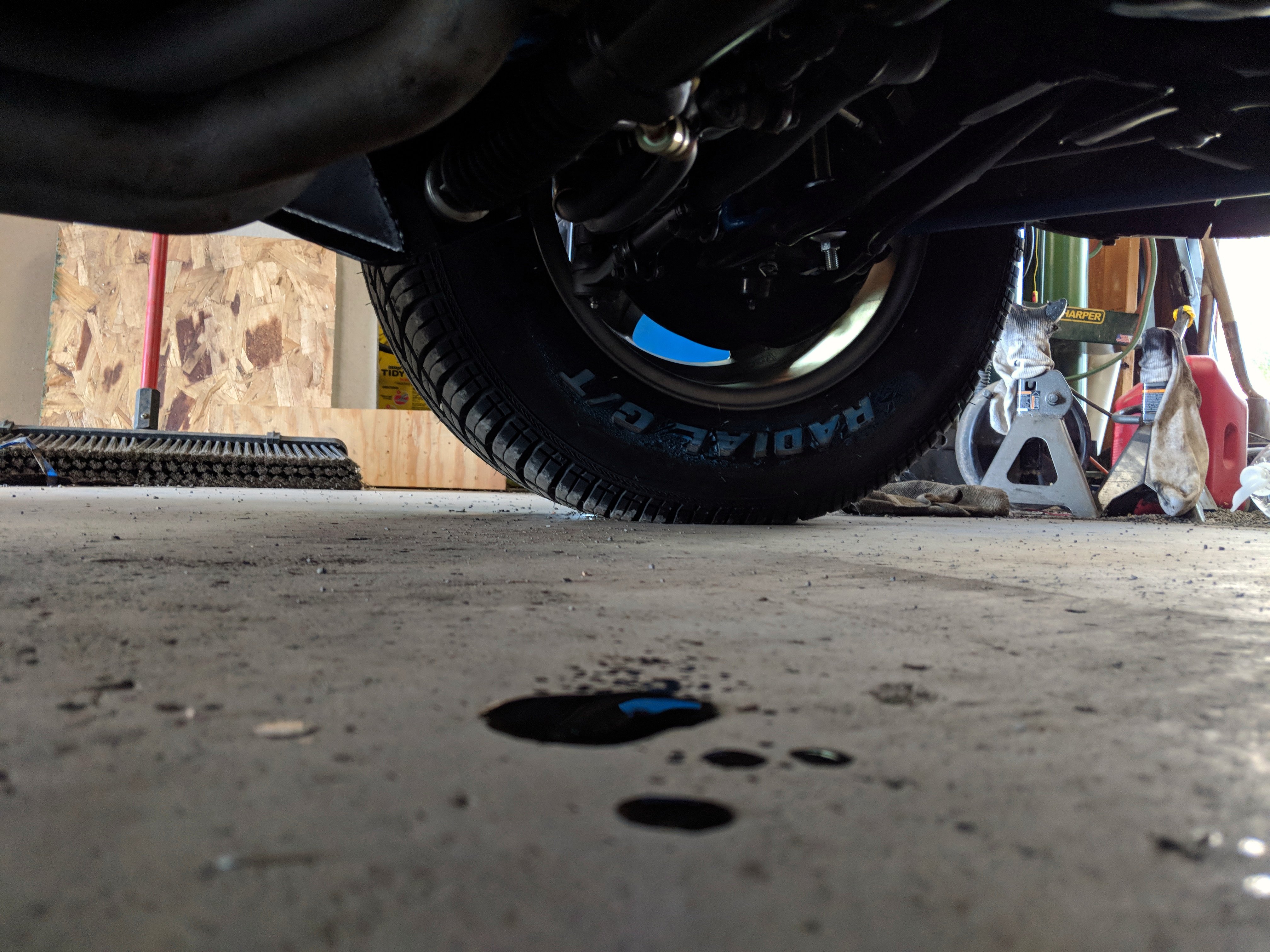 The oil on the floor isn't supposed to be there. I was getting ready to take it down the road for the first time and noticed the rear main decided to leak. It just started doing it today after I ran it back and forth down the driveway a few times. It hadn't done that previously. I guess it's time to do some investigating, which will at a minimum mean pulling the pan and worst case (most probable) pulling the engine.
68 Cougar -Augusta Green
08 Mustang Bullitt - Dark Highland Green
Top 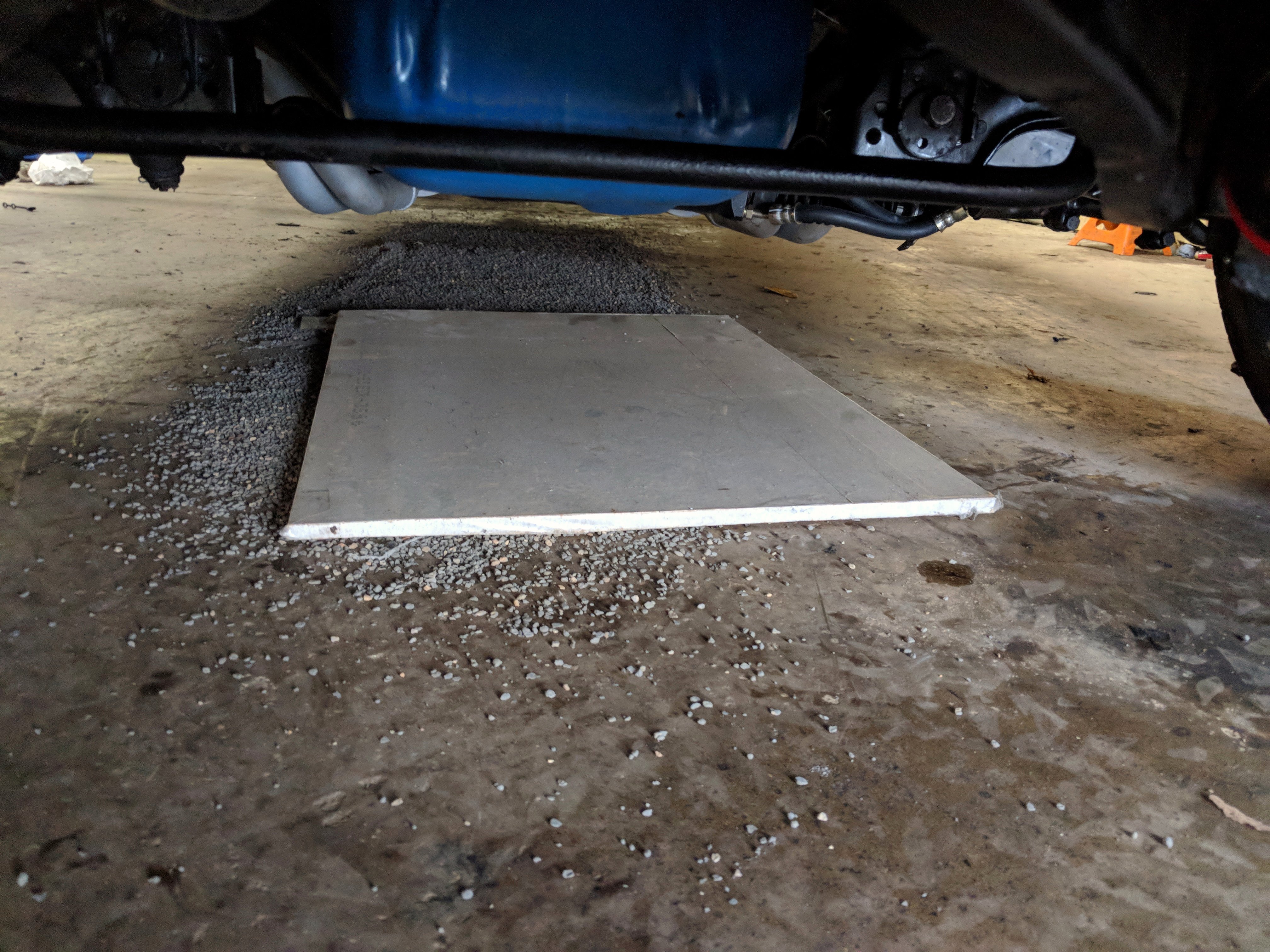 So far, so good.  Hopefully that took care of it.  I ended up getting everything done without pulling anything other than the lower crossmember, starter and pan. One thing I did while I was in there was roll new main bearings into it.  It looks like I probably got some contamination in one of the mains, so I decided to just swap them out.  It was a fairly simple process once I got going.  Everything is back together and running now.  I'm going to replace the rear leaf bushings yet then take it in to get aligned.  I'm shooting for sometime next week to get it aligned.
68 Cougar -Augusta Green
08 Mustang Bullitt - Dark Highland Green
Top

Today was the first day out further than the end of the driveway (which is maybe 50' long). Here's my first passenger: 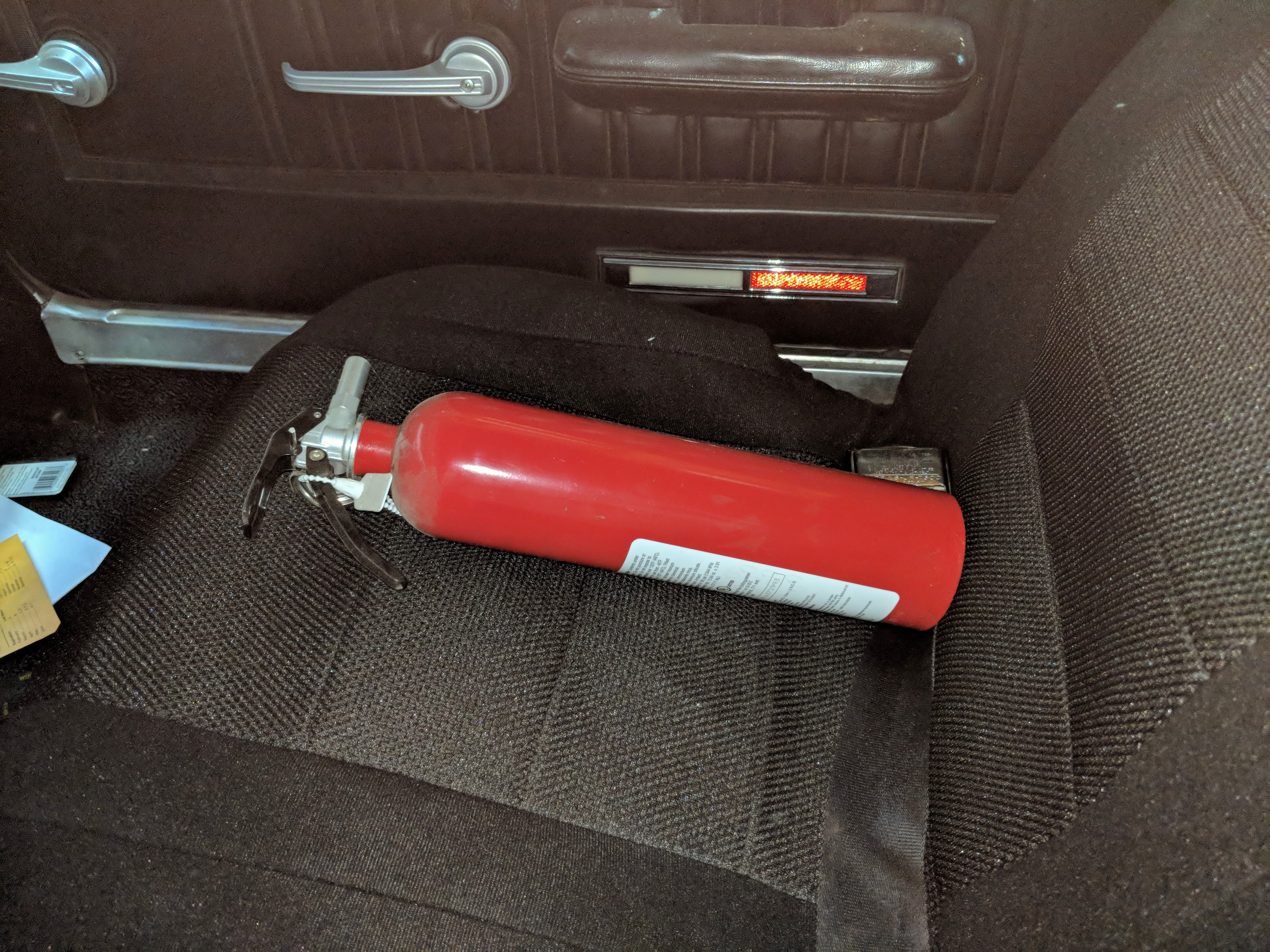 I've still got some bugs to work out with the steering (both alignment and function), but everything else worked well enough to get it out and back in one piece. I'm not going to get too crazy with it yet, but it does still run good enough to put a couple of stripes down... 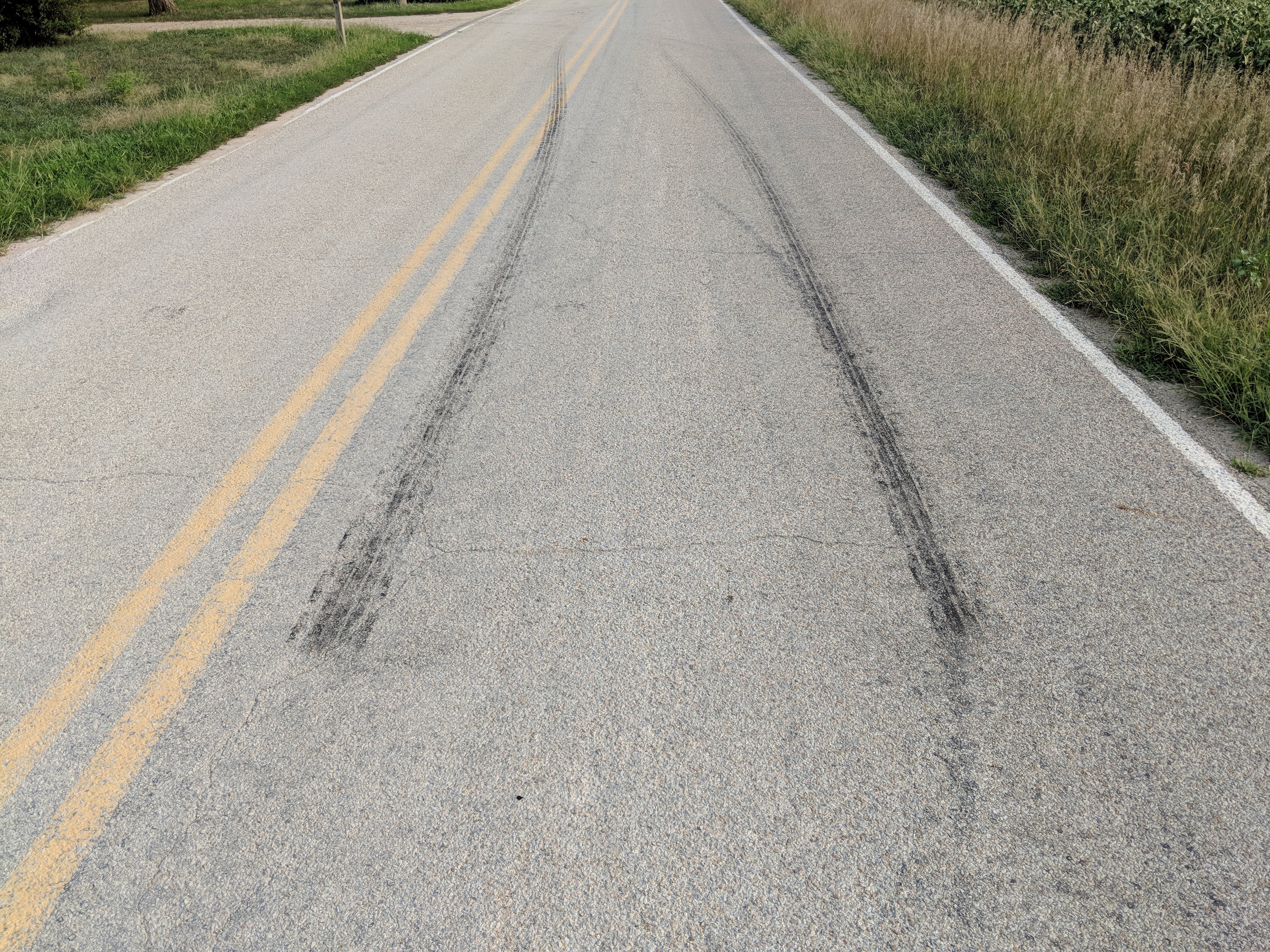 There was also a slight rub on the driver's side front tire if I turned it a certain direction. The lip has been "modified" enough in the past that it's not completely surprising. I'll just roll it a bit (it's clear at the front lower corner) and it should be fine. I'll probably consider getting one size smaller on the fronts next time around, though.
68 Cougar -Augusta Green
08 Mustang Bullitt - Dark Highland Green
Top
Post Reply
146 posts