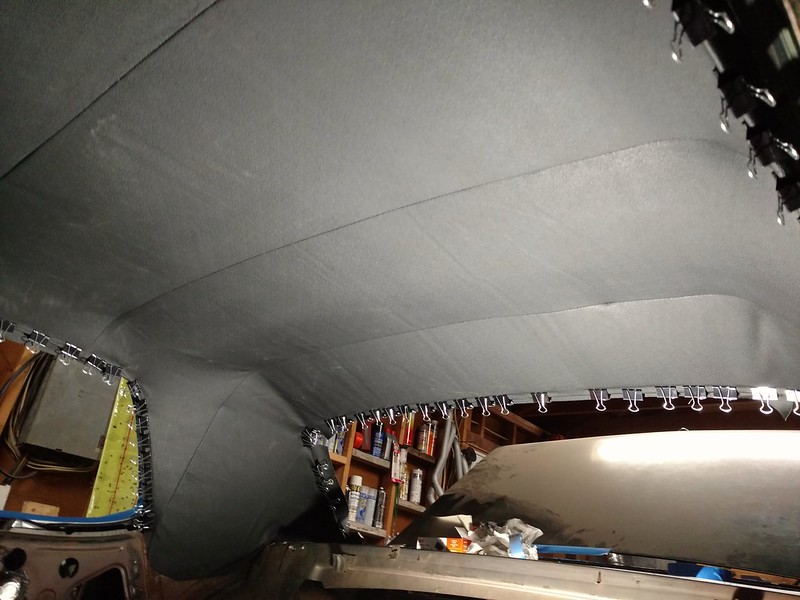 As you can see, it's not perfect. I don't think it turned out too bad, though. My thought is that it's easy to install, but hard to get perfect. I still need to run the heat gun over a few spots to get some more wrinkles out.

Good work on that headliner, this is my next step too. From the people I’ve talked to about installing one of these if you can get it up and clamped in place for a couple days then come back and adjust a few times before you glue it you will get the best results. Also helps doing it in warmer weather too.
I ended up breaking my windshield taking it out but do the back glass out no problem. Install should be easier then removal. My rear glass has never been out so the seal was rock hard and it took a couple hours to get it out without breaking.
1968 Standard, 302 2v, 3 speed.
Work in progress...
Top

Good work on that headliner, this is my next step too. From the people I’ve talked to about installing one of these if you can get it up and clamped in place for a couple days then come back and adjust a few times before you glue it you will get the best results. Also helps doing it in warmer weather too.
I ended up breaking my windshield taking it out but do the back glass out no problem. Install should be easier then removal. My rear glass has never been out so the seal was rock hard and it took a couple hours to get it out without breaking.

Thanks, guys. I had it clipped up in place for a few days before I finally glued it. I know my windshield had been replaced, but I'm pretty sure the back glass hadn't been out. The corners were really hard on mine, too. I did find a bit of surface rust in the corners, but no structural damage to the car. In my experience, getting the middle stretched tight isn't too bad. It's the corners that are the tricky part. I did a LOT of putting into place and then repositioning it. The clips worked pretty well (I got a box of 144 medium sized ones from the local Staples). I ended up cutting the material around the ends of the bows just a bit so I could pull the headliner tighter to the sides of the car. I'm still not 100% satisfied with the shape on the front corners, but I decided the sun visors will mostly cover up the imperfections. The glue I used (3M 98) was pretty forgiving. It got sticky fairly quickly and I was able to reposition it for quite a while. The other thing to remember is to put the small hardware back in place so you can find where to put the new holes in. Good luck!
68 Cougar -Augusta Green
08 Mustang Bullitt - Dark Highland Green
Top

After twisting off the bleeder screw on one of the rear brake cylinders, it became mandatory that I replace them. I got them replaced and this evening I bled the brake system. It appears my flaring technique was good enough that I don't have any leaks. I found a bleeding technique a couple of years ago that works pretty well. Here's a picture of the setup: 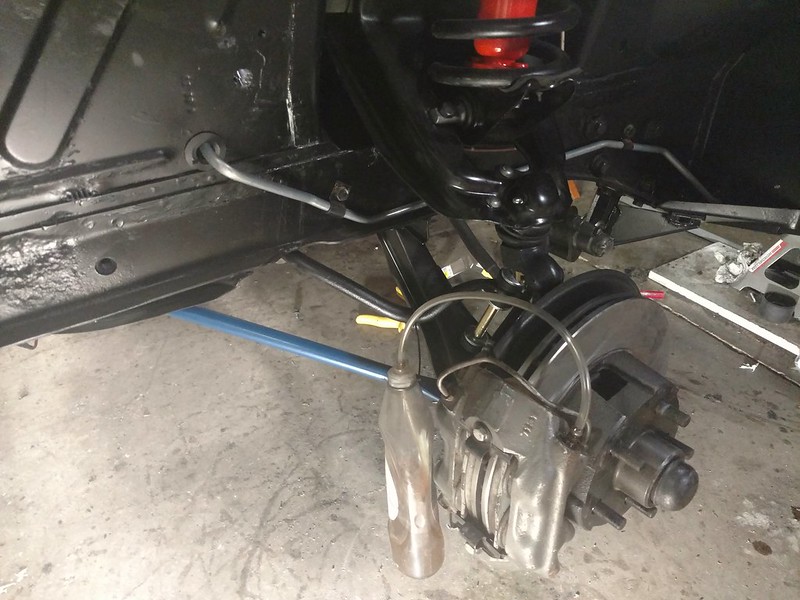 The bottle gets filled up a bit to start with so the end of the tube is under the fluid level, which prevents air from getting sucked into the system when you let off of the pedal. The method works pretty well if you don't have a pressure bleeder or someone else to help you.

I brought up a thread a while back about shock lengths. I decided to go ahead and get some Koni Str.T's. I could never find an actual length of the Mustang shock, so I figured I could use it with just a bit of a spacer. Here's what it looks like compared to my old Monroe shock: 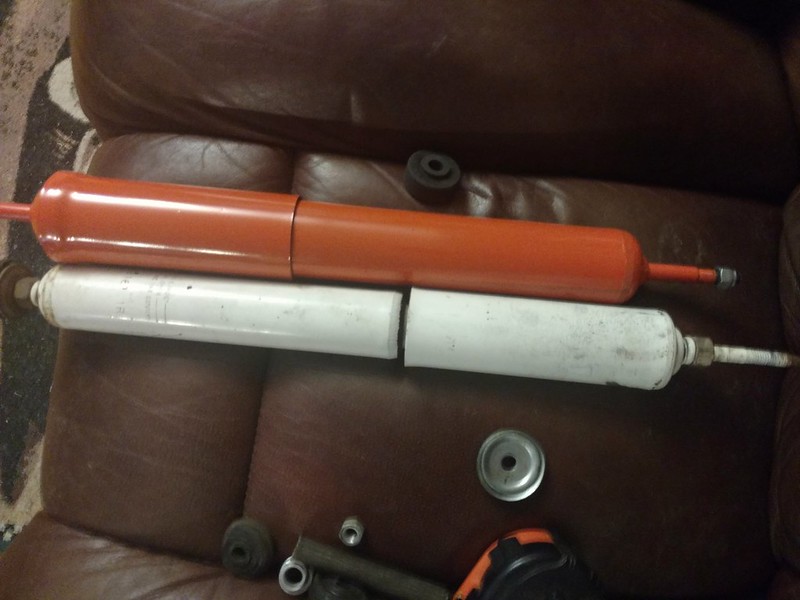 As it turns out, it's almost 2" shorter than what I had on it previously. It didn't even get close to bolting up. I'm still planning on using them, I will just need to come up with a robust method of extending the length. I will say, my setup is "probably" not stock. Just because mine didn't work, doesn't mean an otherwise stock Cougar can't use them.
68 Cougar -Augusta Green
08 Mustang Bullitt - Dark Highland Green
Top

Today was one of those days where I didn't really accomplish much, but it looks like I did a lot. A few interior pieces can really make things look a lot more finished. I mostly did it to get some of the pieces out of the way so I'm not having to work around them. Here's what it looks like now: 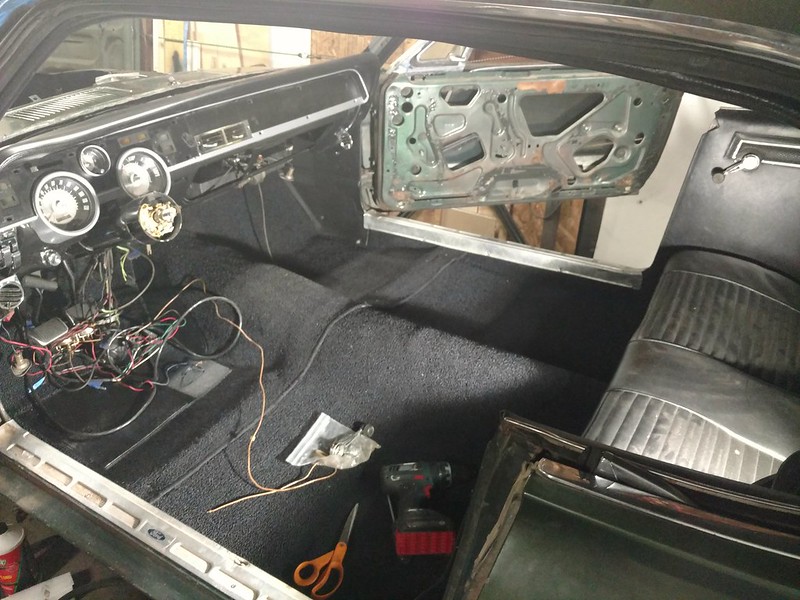 The big mess around the driver's feet area is the aftermarket gauges I've been running. It shouldn't take too much to get them cleaned back up, but it looks like a mess until I get that done.
68 Cougar -Augusta Green
08 Mustang Bullitt - Dark Highland Green
Top

Tonight was a big screw up for me.  The picture speaks for itself: 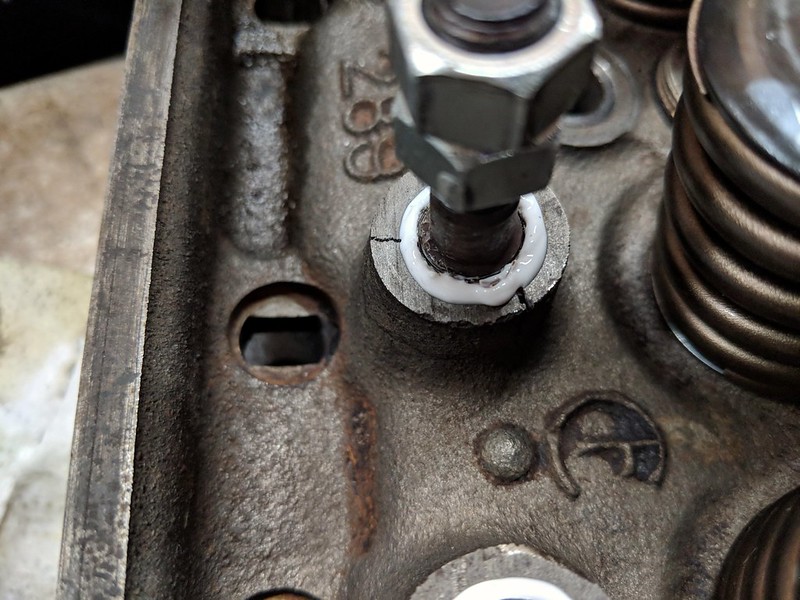 I started tightening down and apparently you don't tighten them to torque specs (even for grade 5).  I'm not sure if the threads weren't deep enough (although they went what seemed to be all the way in by hand), or if the ridge separating the 7/16 threads from the 3/8 threads wedged in the beginning of the threads and split it.  Doesn't really matter, as they're ruined.  Looks like I'll be using my 351W heads after all.  I cleaned them up a bit tonight and will try to get the valves lapped in tomorrow.  One thing I'm doing to them is replacing the old springs and keepers with the new ones.  Live and learn...
68 Cougar -Augusta Green
08 Mustang Bullitt - Dark Highland Green
Top

The engine woes continue.  A closer look at the cylinders and here's what number 8 looked like: 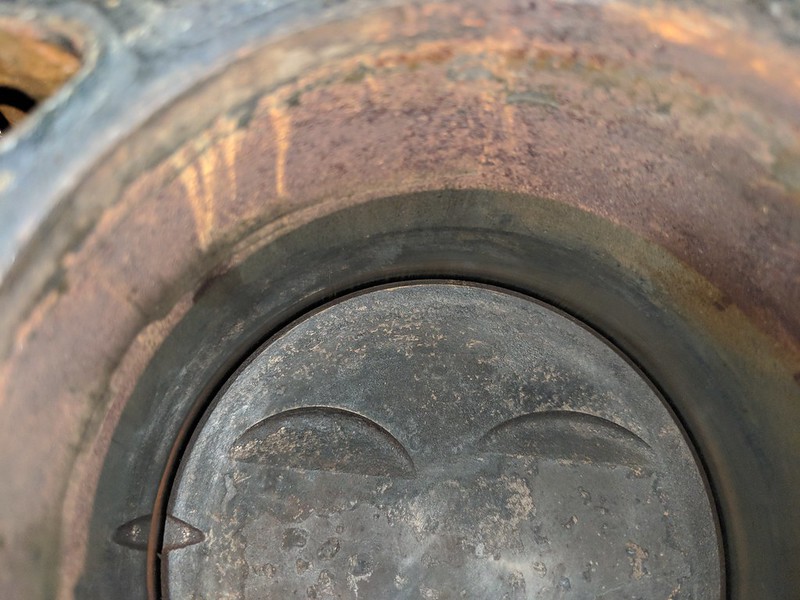 I was thinking that might mean looking at other engine options for it, but I got a hone and ran it through a few times to see if the rust had gouged the metal.  Here's what a little time with the hone did: 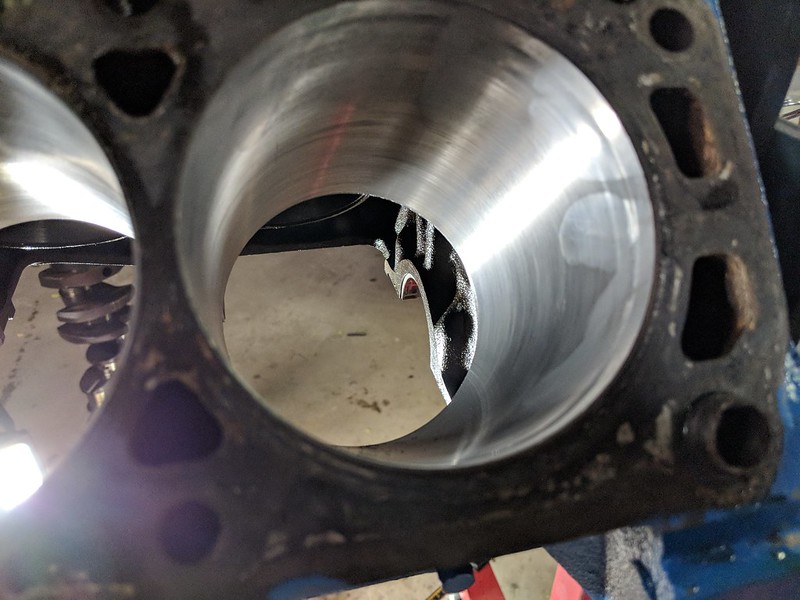 It'll take a little more work, but the roughness is all gone.  It looks like I'll end up getting new rings and bearings.  i was glad to see that we used ARP rod bolts when we did the rebuild.  I'm sure it would be better to do a little more thorough job (like go another .010 over), but I really want to keep the dollar amount to a minimum on this engine.  Any money I don't spend on it will go towards an FE in the future.
68 Cougar -Augusta Green
08 Mustang Bullitt - Dark Highland Green
Top

I went to pick up the final parts today to get the engine back together and the person I talked to ordered the wrong parts.  Yes, it does make a difference if there is a "10" added to the end of the part number.  It looks like it'll be Tuesday now before I get them (from someplace else).  I decided to get some of the rest of the car back together while I'm waiting.  Here's where I'm at on the interior: 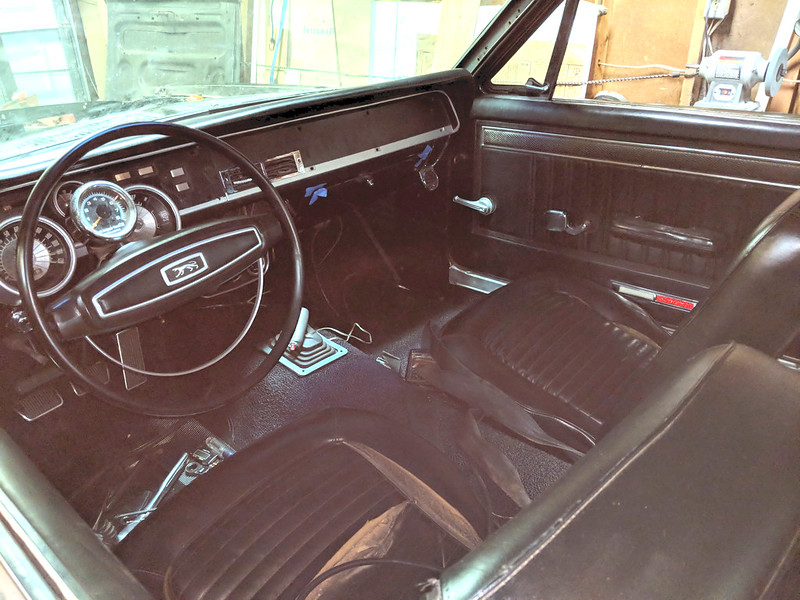 If you look closely you can see the door opener lever doesn't match with the rest of it.  That part is '68 while the rest of it is '67.  My parts car only had one of the levers, so I had to reuse my original for now. I haven't been able to locate '68 door panels, so I'm using some '67s.  I may still try to trade for '68 parts (I actually have 2 sets just like this - both in pretty good shape), but these'll do for now.  One modification that had to be done was with the arm rest. The exposed rectangular area in the picture below had to be cut out in order to mount the '67 arm rest. 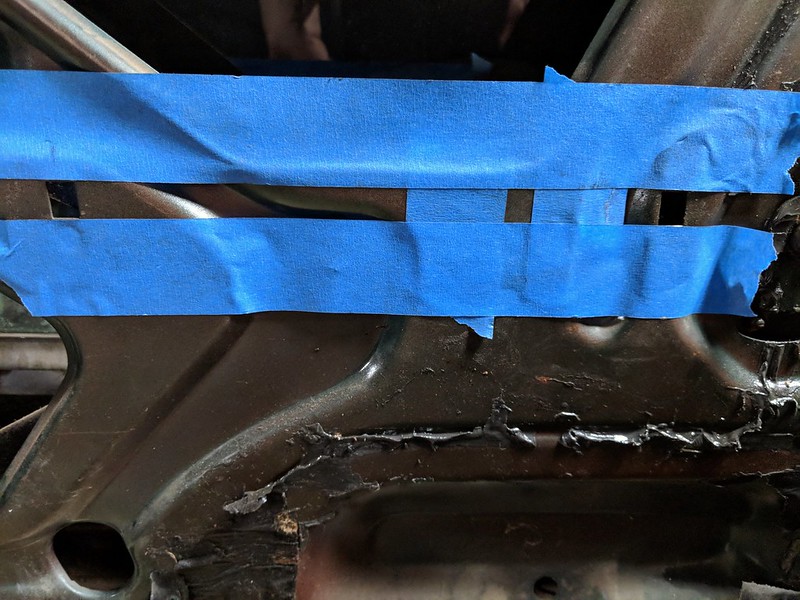 I still need to get the dash face put on, too.  The seats are kind of interesting.  They're actually the original light green ones with some SEM paint on them.  I'll put covers over them when we start using it, but they'll at least not stick out like a sore thumb on the uncovered parts.  Eventually I'll get everything reupholstered, but that's not in the budget for this summer.  Along with the interior, I put everything but the hood back on the car as far as bodywork.  Here's what it looks like complete: 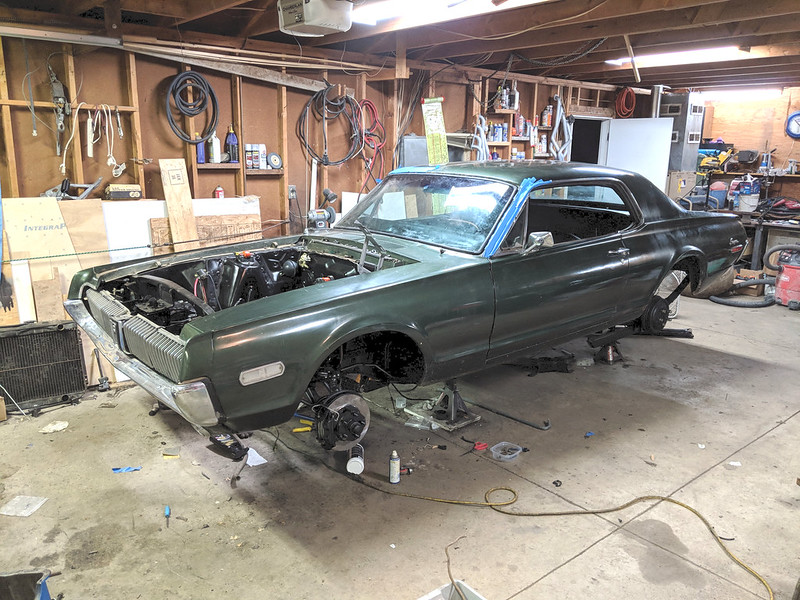 The pictures still make it look a lot nicer than what it is.  It's in pretty desperate need of bodywork and paint, but that's for later, too.  It's usable like this, so I'll drive it like this for a while.
68 Cougar -Augusta Green
08 Mustang Bullitt - Dark Highland Green
Top

Today included a trip to the tire/wheel shop.  I'm pretty happy with the way it turned out.  Here's a similar angle to the previous one: 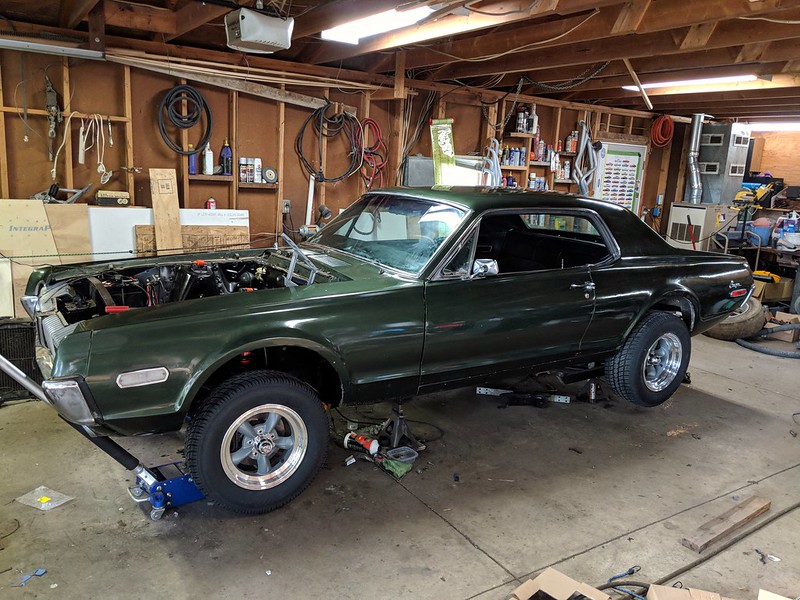 And here's one showing where the rear wheel sits relative to the body lines: 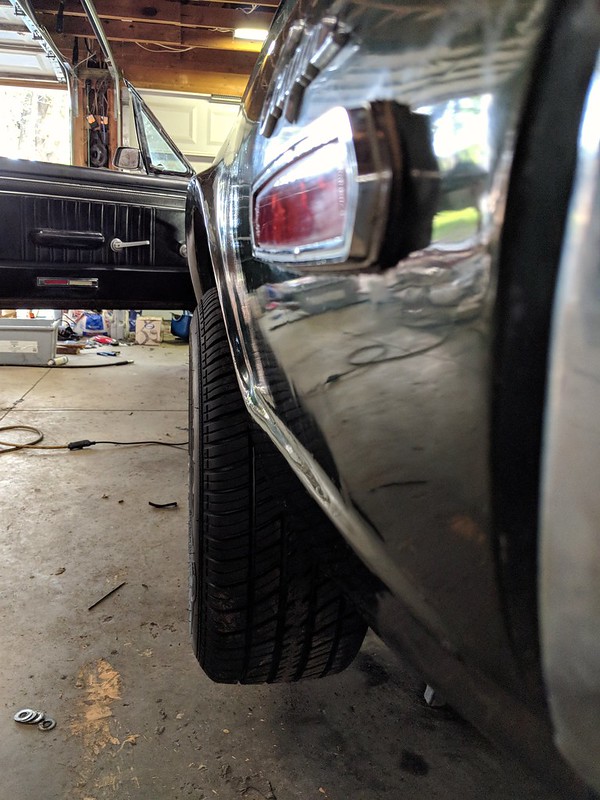 The car is still up in the air, so the stance will be a bit different, but this is pretty much what it'll look like once it's on the road again.  I'm sure there will be some adjustments to ride height once things get sorted out a bit.  The fronts are 215/70R15 on a 15x6 Torq Thrust D and the rears are 255/60R15 on a 15x8.5 Torq Thrust D.  The differential is 2" narrower than stock, so the 8.5" wide rear rim worked out pretty well.  I probably could have gone a bit bigger with the tire, but this will be alright. I've been wanting to do this tire/wheel package pretty much since I bought the car, so it's nice to actually see it done.
One other thing I found out today is my rear wheel studs are too short for the aluminum rims. The fronts just barely get through the open end nuts, but the rears don't quite make it through. I've got a set of longer studs on order and will get them swapped out before it hits the ground. My front hubs/rotors are new, so it appears like they adjusted the size a bit in order to make aluminum rims usable.
68 Cougar -Augusta Green
08 Mustang Bullitt - Dark Highland Green
Top

I made a little more progress, but not as much as I had hoped. I was wanting to take it on a trip this weekend, but parts issues (or lack thereof) will keep that from happening. Here's how it looked Wednesday: 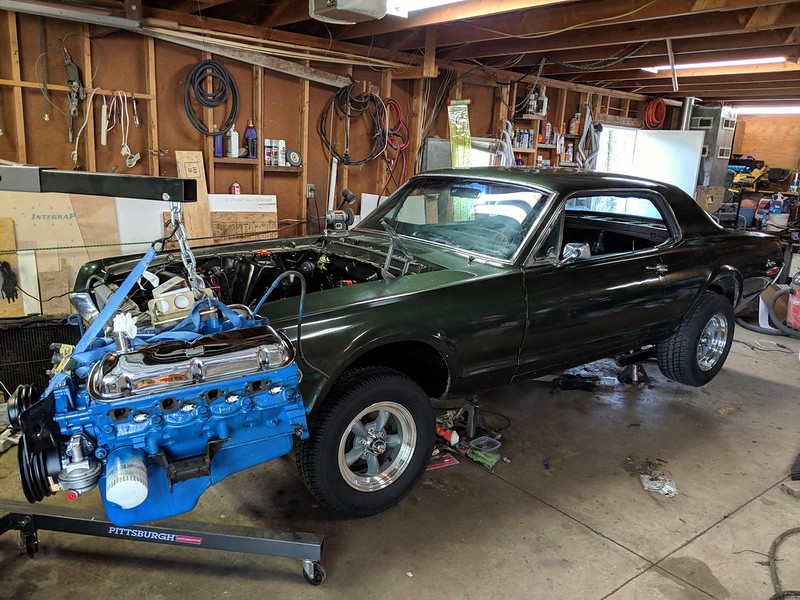 and here's how it looks now: 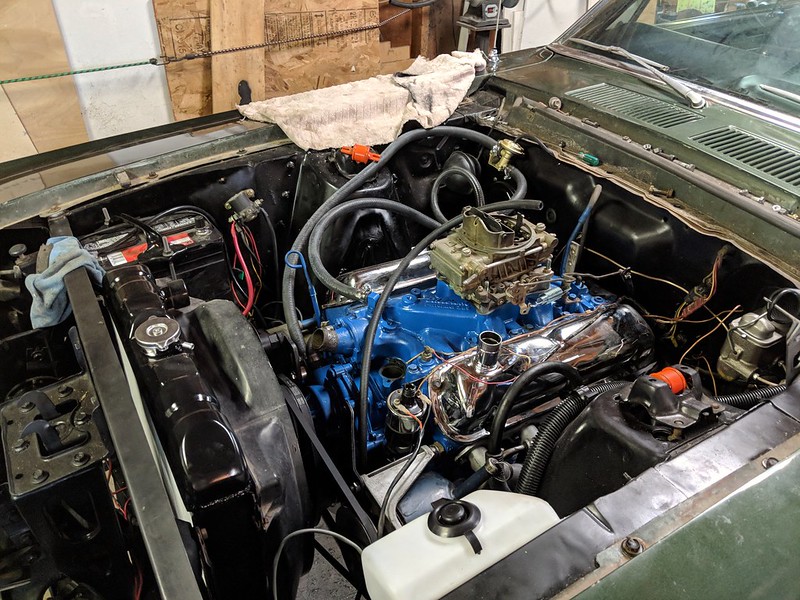 I was all ready to go with the engine on Wednesday, but a parts issue meant I needed to get a new clutch set for it. I got it at 7:30 this morning and have it put in the car. It's nice to see a shifter coming up through the floor again! 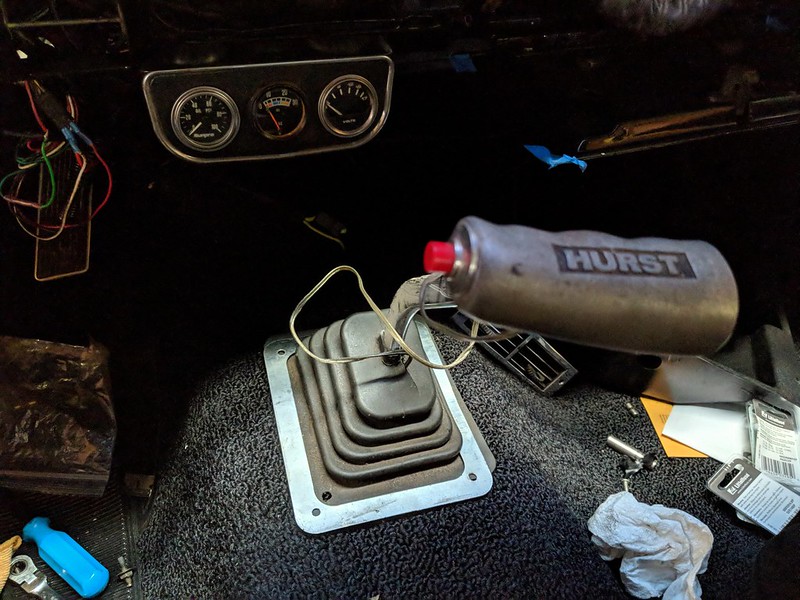 Now that deadline number 1 is past, I'll probably slow down just a bit on the progress. I'd still like to get it going in the next several weeks, though.
68 Cougar -Augusta Green
08 Mustang Bullitt - Dark Highland Green
Top
Post Reply
146 posts